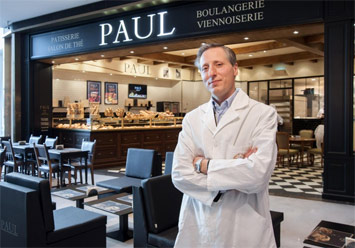 Jo’burgers have cause to rejoice: the world-renowned French bakery-cafe known simply as PAUL has launched its flagship store in Melrose Arch, a little later than initially expected.

In November 2015, Famous Brands announced it has signed an agreement with the chain to become its South African licensed partner for a ten-year period.

In terms of the agreement, Famous Brands will open five restaurants over a five-year period in three trading formats.

Founded in Northern France in 1889 by a family whose finest baking traditions have been passed down over five generations, PAUL International is chaired by Maxime Holder, who sees to it that the company’s incredible 128-year heritage underpins an ethos of constant innovation.

PAUL is famous for its artisan breads – including brioche, baguettes and other specialities – and since every loaf is handmade, it takes seven hours to prove the dough to develop its full flavour.

The French viennoiserie are like no other, and made with classic, 100% butter recipes that yield a golden and crisp puff pastry. PAUL’s sublime fruit tarts have become one of its most widely acclaimed exports, whilst its delectable selection of cakes range from sponge to mousse and everything in between.

The brand’s extensive offerings have evolved to include breakfasts, brunches, lunches, afternoon tea, dinners as well as take-aways.

PAUL opened to the public onThursday 2 March 2017. Find it at shop 010I3, Corner The High St and Crescent Dr, Melrose Arch, Jo’burg.