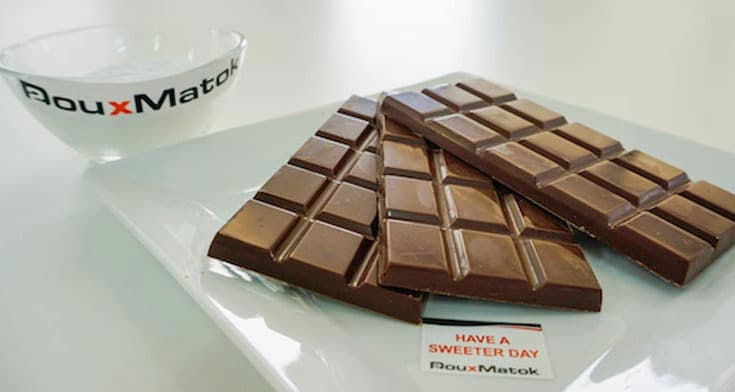 Forget artificial sweeteners. Researchers are now developing new forms of real sugar, to deliver sweetness with fewer calories. But tricking our biology is no easy feat. [An excellent article, essential reading for every food tech/scientist and product developer! Long read...]

Eran Baniel, a former actor now in his mid-seventies, became the founding CEO of DouxMatok in 2014, an Israeli startup that is now releasing its first product: sugar crystals that have been redesigned to taste sweeter, so that you can put forty per cent fewer of them in a Petit Beurre cookie and it will still taste as sweet as the original.

The company has branded its sugar Incredo, a name that gestures toward the disbelief that greets any suggestion that we might be able to have our cake while eating only half the sugar, too.

At the company’s headquarters, every available surface seemed to be laden with Incredo-sweetened treats — cookies, chocolates, gummy bears, jars of cocoa-hazelnut paste. In blind tastings conducted by a consumer-research company, more than two-thirds of a panel of ordinary consumers said they preferred the Incredo Petit Beurres to the full-sugar ones, and seventy-four per cent indicated that they’d rather buy the Incredo version of Nutella than the real thing.

It won’t be long before they can: later this year, Incredo will enter commercial production with Südzucker, Europe’s biggest sugar producer, as well as with one of the leading refined-sugar distributors in North America, whose identity, I was told, had to remain undisclosed.

Such secrecy is unsurprising in an industry dominated by multinational corporations all spending large amounts on research and development in pursuit of the same goal: to continue selling countless sweet things in a world that is increasingly wary of sugar.

In 2015, the WHO recommended that no more than ten per cent — and, ideally, less than five — of an adult’s daily energy intake should come from sugar. In other words, an average adult, with a daily consumption of two thousand calories, ought to consume no more than six teaspoons of sugar a day — the amount found in a generous schmear of Nutella, and quite a bit less than the contents of a can of Coke.

The following year, the Obama Administration announced new rules requiring companies to disclose their products’ added-sugar content on the Nutrition Facts label. Some governments have gone further. Many countries, especially in Europe and South America, have begun placing health-warning labels on, and taxing, products containing more than a teaspoon or two of sugar per three ounces — a category that includes many things that people think of as innocuous, such as breakfast cookies, oatmeal muffins, and nutrition bars.

These measures seem to be having an impact. Recent surveys report that seventy per cent of Americans are concerned about the sugar in their diets, and UK shoppers rate sugar content as the most important factor in making healthy food choices.

As public opinion turns against sugar, food companies have outdone one another in pledges to cut the quantities of it that appear in their products. Pepsi has promised that by 2025 at least two-thirds of its drinks will contain a hundred calories or fewer from added sweeteners.

A consortium of candy companies, including Mars Wrigley, Ferrero, and Russell Stover, recently declared that by 2022 half of their single-serving products will contain at most two hundred calories per pack. Nestlé has resolved to use five per cent less added sugar by the end of this year — though, as of January, it still had more than twenty thousand tons of the stuff left to eliminate.

The problem is that sugar isn’t easy to replace. Despite scientists’ best efforts in the past century, none of the artificial alternatives that have been developed are quite as irresistible, let alone as versatile in the kitchen.

The looming impact of new nutrition standards, combined with regulatory pressure and public sentiment, has led to something of a panic in the industry, and a flurry of innovation. The new race — in which DouxMatok is only one of several competitors — is not to develop a substitute for sugar but to design a better sugar altogether.

DouxMatok’s method of restructuring sugar crystals was invented by Baniel’s father, Avraham, an industrial chemist. He patented the technique five years ago, when he was ninety-six; today, at the age of a hundred and one, he has finally retired.

After the war, Avraham helped found the newly formed State of Israel’s national mining institute. In the following decades, he was granted more than two hundred patents, for processes that ranged from turning wood chips into biofuel to synthesizing a key ingredient in carpet fibres. “The first chemical technology sold abroad by Israel was from my father,” Eran told me — a method for producing potassium nitrate that was licensed to Japanese fertilizer manufacturers in the nineteen-fifties.

Avraham began thinking about sugar in the late nineties, while he was serving as a consultant to a British food company that was launching a new artificial sweetener in the United States. Early sales had been slow, and consumer research seemed to show that children, in particular, remained resolute in preferring real sugar.

Avraham was reminded of something he’d noticed back in the nineteen-forties, when sugar was strictly rationed. His neighbour, an elementary-school teacher, had asked him whether, as a chemist, he might be able to get hold of some cornstarch so that she could make a pudding. Her theory was that its thick and sticky texture would coat the tongue, helping her students’ meagre allowance of sugar seem more satisfying.

After helping his neighbour, Avraham made some pudding himself, and found that she was right: up to a point, the more viscous he made it the sweeter it tasted. Sixty years later, he began to wonder whether the best way of reducing sugar was not by replacing it but by reformatting it. Sucrose is delivered to the taste receptors on our tongues by saliva, as sugar crystals dissolve in our mouth, but only about a fifth of the sugar in a typical bite of cookie actually connects with a receptor. The rest of it is washed down into our bellies — calories we consume but never taste. “Statistically, it goes everywhere you don’t want,” Eran told me.

Searching for a way to tickle the sweet receptors more effectively, Avraham tried blending pure sucrose with various carriers. Eventually, he hit on the idea of mixing sugar with tiny grains of silica, a common ingredient in the food industry. (Silica passes through the human digestive system without being metabolized.) Each silica grain is less than a fiftieth the diameter of human hair—invisible to the eye and undetectable on the tongue. DouxMatok’s production process embeds them throughout each sugar crystal, like blueberries in a muffin…..