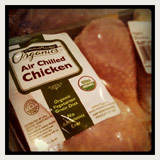 06 Sep 16 The benefits of air-chilled chicken

Chicken could taste a whole lot better if its post-slaughter treatment was different, contend a growing band of American foodies who are lauding the premiums to be found in air-chilled chicken.

For Ariane Daguin, the daughter of French restaurateurs and founder of high-end meat purveyor D’Artagnan, her first bites of American chicken were nothing short of terrible.

“I didn’t understand,” she says, the memory of disgust still audible in her voice decades later. “It tasted like fish sometimes. Other times it was tasteless.”

A big part of the reason, she soon discovered, was because of the way the chickens were cooled after slaughtering: with a dunk in a cold water and chlorine bath.

“It’s probably part of the reason I started the company,” Daguin says.

After a bird is killed, de-feathered, and eviscerated, its body temperature needs to be brought down quickly to stop and prevent the spread of pathogens such as salmonella. In the US this is usually done by submerging the chickens in tanks of ice water, often treated with antimicrobial agents like chlorine or hydrogen peroxide.

But in Daguin’s native France and the rest of the European Union, doing such a thing to a chicken was nearly sacrilege. The chicken will absorb some of that water, and whatever else is in it—say, chemicals or bacteria—diluting its natural flavour and changing the texture.

This is why D’Artagnan and a growing number of other higher-end chicken purveyors, such as Bell & Evans and Pitman Family Farms (aka Mary’s Chicken), use a different method to cool their chickens: air chilling.

Instead of immersing the carcasses in cold water, they blast them with cold air. Suspended by their feet on rails, the chickens pass through or sit in cold chambers for as long as three hours to reach the required 40F (4C). (In evaporative air chilling, a cold water mist is also applied.)

This method takes longer—90 to 150 minutes, compared with immersion’s 50—and requires more space because of the single-file layout. But it also uses significantly less water: Air chilling saves at least half a gallon of water per bird, coming out to a 4.5 billion-gallon savings if all of the country’s 9 billion birds were processed that way, according to a 2008 report from the USDA.

Currently an air-chilled chicken is more expensive, but it’s also tastier, since the meat hasn’t been bulked up with water.

Any home chef who’s attempted to make pan-roasted chicken has likely encountered the consequences of water immersion firsthand. That liquid in the pan is not the chicken’s natural juices; it’s the chlorine bath the bird soaked in at the processing facility. Raw chicken at the supermarket may contain as much as 12 percent retained water, according to the USDA, which also notes that the amount must, by law, be declared on the label.

D’Artagnan has been selling organic, antibiotic-free, and free-range fare since 1985, long before such words had entered the mainstream vernacular. But even now, when Walmart, Target, and Amazon.com all sell organic chicken, finding some that hasn’t been compromised by the water immersion cooling method is difficult.

Air-chilled chicken accounts for less than 1 percent of production, according to a spokesperson for the National Chicken Council.

Proponents of the method, including Daguin, point to a food safety benefit.

Air chilling “may result in fewer birds being positive for salmonella,” says John Marcy, a professor and poultry processing specialist at the University of Arkansas System Division of Agriculture, because you don’t have multiple carcasses sharing the same bath.

But, he adds, neither method provides a 100 percent guarantee.

“In my reality,” he says, “all raw foods of animal origin have some level of risk.” To ensure your chicken doesn’t carry a pathogen onto the plate, don’t rely on the chilling method—make sure it’s cooked completely.

The taste advantage, however, is no longer subject to much debate.

“Research show[s] that air chilling led to better quality of breast fillets and provided higher cooked-meat yields than immersion chilling,” the USDA concluded in 2008. Chef Doug Psaltis of RPM Steak in Chicago started serving air-chilled chickens about 13 years ago and “never turned back”.

“While preparing the bird, if you do choose to brine the bird, air-chilled will allow you to absorb great flavours and aromatics, whereas water-chilled has already absorbed chlorine,” he says. “I would rather have a chicken that is not water-chilled at all costs.”….