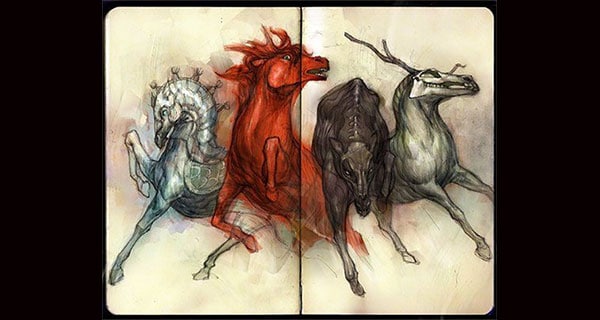 A food industry ‘Davos’ is needed to tackle its role in global warming and other woes, argues this senior ex food company executive. [Compelling reading. Ed]

In mid-January, titans of industry, heads of state and other influencers gathered in Davos, Switzerland, for their annual convocation to address the world’s environmental, economic and social challenges, including climate change. As young activist Greta Thunberg berated her elders for inaction on global warming, wildfires raging half a world away in Australia underscored the urgency of her message.

The food industry is under fire for contributing to many of the problems that trouble world leaders the most, yet only a few companies and industry sectors are making a concerted effort about dealing with them.

Obesity, under-nutrition and now climate change are the three horsemen of a coming food industry apocalypse.

Like the biblical story (which featured four horsemen), the food industry’s version is a dire warning to traditional food suppliers. Unless food manufacturers unite as one group, with Davos-like influence and scope, to set higher standards for their products, they will not escape the wildfires of regulation, public scorn and competition that will lay waste to their businesses and threaten their survival.

Respected and compelling voices are blaming the food industry for its negative impact on the world’s environment and public health. The first shot across the bow came a year ago, from a Lancet Commission Report [critiqued by many for the vested interests behind it – Ed] that called obesity, under-nutrition and global warming a “syndemic”, with Big Food companies shouldering much of the blame.

This report has since become the rallying cry for public health advocates and activists to attack the food industry and drive tectonic change in the sector.

The Lancet Commission has recommended several systemic changes to head off the three crises.

Given the severity of these accusations, I’m troubled that the food industry as a whole isn’t listening.

Yes, several packaged goods firms like Unilever and PepsiCo have stepped up to address plastic package waste and industry sectors like confectionery and (even) soft drinks have committed to reduce calories and portion sizes, but the industry as a whole (manufacturers, food retailers and restaurant chains) has not coalesced around addressing these issues.

Many are conducting business-as-usual and letting the biggest, most visible targets like Coca-Cola and McDonald’s take the hits. Others are clinging to the “four Ps” of marketing (Product, Price, Place and Promotion) to save them. But they won’t.

With abundant health and climate information available online, today’s consumers are no longer so easily persuaded.

Without action, their adversaries will continue to pick them apart over the next decade. Respected journals and the mainstream press will continue to spotlight industry’s role in public health crises. Food activists and their social media machines will amplify the messages and deliver them straight to the hearts and minds of health-conscious and environmentally woke consumers everywhere.

The despised soda taxes will spread to junk foods. Black “stop sign” warnings on food packages like they have in Chile will alert consumers to less healthy options. Small but virtuous new companies will continue to poach health-conscious customers.

And Big Food can expect plummeting market valuations as these problems erode their sales and undermine their entrenched ways of manufacturing, marketing, distributing and selling food.

Big Food won’t be able to market or lobby its way out of this apocalypse….