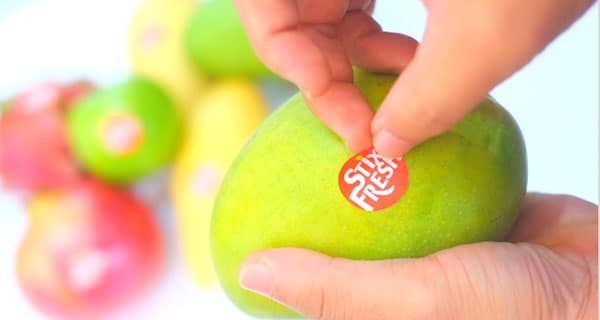 In the process of transporting produce all the way to supermarkets , it is estimated that 52% of fresh fruits and vegetables go to waste before they even make it to the consumer (US figures).

With the problem of food wastage on top of his mind, Malaysian inventor, Zhafri Zainudin, set out to change the agriculture industry by introducing StixFresh, a labelling sticker that prolongs the freshness and shelf life of certain types of fruits.

StixFresh stickers are coated with a mixture of sodium chloride and beeswax, which slows down the fruit ripening process by removing ethylene.

Beyond the time-consuming shipping process, it’s a constant struggle to ensure the produce arrives in the best possible condition. For retailers, these losses equate to lower margins which in turn affects their cash flow negatively.

With the goal to make fruit last longer in a natural way, Zainudin spent almost three years to perfect the sticker in terms of efficacy and manufacturing process. StixFresh was then officially established in 2017.

“We did a joint development with our local university UPM, research institutions and agencies such as Mardi and SIRIM, and recently with Bogor University and University of South Australia,” Zainudin added.

In the beginning, StixFresh was only targeted to extend the shelf life of mangoes. Later on, they only found out that it also works on other types of fruits which have almost the same size, and other similarities such as skin texture, diseases and fungal attack.

So far, StixFresh works with apples, pears, avocados, dragon fruits, kiwis, mangoes, and citrus, and Soliman said that they’re working to grow the list. They’re also trying to branch out into more vegetables and the holy grain of food waste: berries. Not only do they spoil quickly, it’s also unfeasible to put a sticker on every single blueberry.

Then again, StixFresh’s end game is for their technology to end up on those branded stickers. “We’re envisioning that you’ll be able to apply our formulation to standard stickers,” said  Zainudin. “It will have Chiquita or Dole written on it, but it will have our [technology] in it as well.”

In addition to selling to distributors, StixFresh wants to make a consumer-facing option. Theoretically, people could pick up a pack of StixFresh stickers in the produce aisle and stick them on their avocados when they got home.

“The simplicity of application allows it to be adapted at any point along the supply chain,” said Zainudin.

This versatility is what sets StixFresh apart from Apeel, another produce-saving technology. Apeel creates an edible coating that farmers and distributors can apply to produce to extend shelf life. While efficient, this technology is limiting; Apeel has also only been tested on avocados, asparagus, and some citrus fruits.

The beauty of StixFresh is that it can be applied to a relatively wide variety of produce at any time, from harvest to home.

Of course, the downside is that you have to use stickers, which will eventually end up in a landfill. But that seems a small price to pay if it could significantly reduce the amount of food waste.

StixFresh recently launched an IndieGoGo campaign, which has exceeded its goal with 26 days left to go. The company is currently doing R&D out of a facility in Belgium and plans to send stickers to their early backers by August of this year. Soliman didn’t disclose pricing yet, saying it depended on how quickly they could scale production, but Early Bird backers on IndieGoGo can snag a pack of 50 stickers for $30.