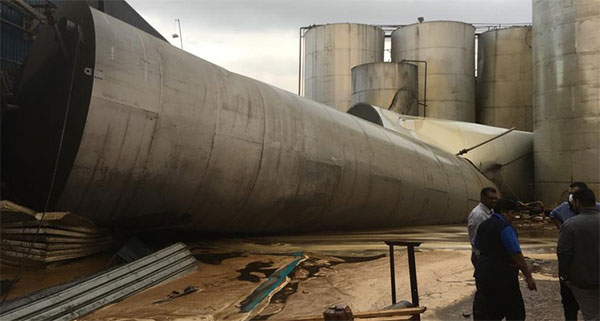 Sometimes, a really bad dose of pollution news can have a silver lining. On 13 August about 30,000 litres of edible cooking oil and caustic soda spilled from collapsed storage tanks at the Willowton Oil factory into a tributary of the Msunduzi River, scene of the historic Dusi Canoe Marathon between Pietermaritzburg and Durban.

Within a matter of days, fish, crabs and invertebrate life were all but wiped out from a 40km stretch of river.

The sticky liquid clogged the gills and breathing systems of fish and other water creatures – choking the life out of them, aquatic experts explained to delegates attending the annual Conservation Symposium near Howick last week.

To make things worse, the spillage also included a large quantity of caustic soda, a toxic chemical used to manufacture everyday products such as soap and detergents.

Within a matter of hours, the Baynespruit tributary resembled a bubble bath, a frothing mass of cooking oil and liquid detergent.

“The Baynespruit is one of the worst polluted streams in the country, so you ask yourself, ‘Could it get any worse?’…. And then we had the Willowton spill!”

Dr Mark Graham, a senior aquatic scientist and director of the GroundTruth consultancy group, said response reports revealed that over 1,750 tons of vegetable oil and caustic soda flowed from the collapsed storage tanks at Willowton. Of this, around 110 tons left the site of the spill.

Graham is now part of a team of independent experts appointed to deal with the incident. He said that although a significant volume was recovered by oil spill teams, up to 20 tons ended up in the Darvill sewage works and another 20 to 30 tons remains in the environment post cleanup…..

He said many fish died immediately from the clogging effects of the oil, the toxicity of caustic soda and the crude soap that formed from the combination of oil and caustic soda.

Over the ensuing days up to 15 tons of dead fish were removed from the river system as far down as Umfula Store on the Mngeni River, 51km downstream from the pollution source.

“We assume that another five tons of dead fish were eaten by birds, otters and other scavengers, translating into about 51,000 dead fish (or 750 fish per linear kilometre).”

Graham said he was hopeful that some juvenile fish and other remnant aquatic life had survived in some of the back channels and water pools to start recolonising the river system, but it was likely that several fish species would have to be re-introduced back into the system.

“The fact that the river has taken such a hit is clearly a concern,” said Brownell, noting that fish and invertebrates (tiny aquatic nunus) serve a vital role in cleaning up urban pollution and municipal sewage spills by processing E.coli (sewage bacteria) and other pollutants.

Interviewed soon after the Willowton spill, the Chairman of DUCT, Dave Still, said the disaster had considerably weakened the natural ability of the river system to deal with chronic pollution.

For several decades, chronic sewage pollution in the Msunduzi catchment area has been a big issue. According to data collected by Umgeni Water, which has been doing weekly sampling of a number of sites around Pietermaritzburg for more than 30 years, an average 20 million litres of sewage is leaking or spilling from Pietermaritzburg’s sewers every day.

Apart from threatening the continuation of the now nearly 70-year-old Dusi Canoe Marathon, the impacts of this sewage pollution have been severe.

“It is unhealthy for community gardens and for kids swimming in the river and it is steadily turning Inanda Dam green – more than 60km from the source of the pollution,” said an environmental scientist who is also a paddler and who asked not to be named.

“These days when we paddle the Dusi it is like pea green soup at the top of the dam, and still somewhat green at the overnight stop, about 14km from the headwaters. This is not only a sign of a dam in distress — eutrophication is the technical term — but it will ultimately push up the cost of the purification of that water.”

Graham observed that the Willowton spill and ongoing sewage pollution in the Msunduzi catchment was a microcosm of many similar problems across the country, such as the Vaal River, where large volumes of untreated or poorly-treated sewage flows into the country’s rivers every second – mostly from municipal sewerage works.

…. Brownell said DUCT hoped that one of the big lessons that emerged from this spill was that healthy rivers are vital to improve the quality of water and that NGOs and civil society play a critical role in monitoring and holding industry and government to account.

While Willowton has often been fingered in the past as a major river polluter, Brownell said DUCT had been impressed by Willowton’s commitment to change following the catastrophic spill.

“Willowton has realised that they are not just an isolated company in Ohrtmann Road, Pietermaritzburg. Their potential impact extends as far as Inanda Dam and Durban’s drinking water. Willowton have shown commitment to making a difference going forward by signing a memorandum of agreement with the DUCT to establish the new Baynespruit Conservancy – so perhaps there is a silver lining to this affair.”

In a statement, Willowton said the conservancy would be guided by a stakeholder group, The Baynespruit Conservancy Steering Committee. This committee consists of representatives of catchment-based community conservation groups, local civil society organisations, local industry, and leading Willowton representatives.

The conservancy will develop project proposals and raise funds to incrementally achieve the goal of a healthy Baynespruit Stream.

“An immediate and guiding action of the Baynespruit Conservancy will be the commissioning of a catchment action and management plan to guide and prioritise the short, medium and longer-term activities of the conservancy. The action catchment management plan will also be funded by the Willowton Group,” reads the statement.

Brownell believes that in the coming years hundreds of millions of rands will be needed to address a wide range of pollution and catchment degradation problems in both the Msunduzi and Mngeni rivers systems.

“The problem is so big that we just can’t wait for government to solve everything. Ultimately every water user in the catchment needs to recognise the importance of restoring our catchment, so that we can continue to have enough water, of good quality, in the future. Water is everybody’s business,” said Brownell.