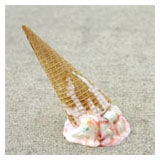 Most people would have used the “five-second rule” to justify rescuing some tasty tidbit from the floor at some point in their lives, but is there any truth to it?

A new study in the journal Applied and Environmental Microbiology  has found that the five-second rule, which most parents know and love, is probably, in lay terms, mostly bogus.

There have been other studies on the topic, but they’ve largely been unpublished, or carried out by science television shows, so it’s hard to know what to believe about the “rule”.

But this new study seems to be more rigorous, and has actually been published in a peer-review journal — so it may mean that it’s time to tweak our thinking about food safety.

Researchers at Rutgers University have tested the rate that bacteria transfers from various surfaces to various foods, and their findings may be hard to stomach.

The researchers tested the so-called rule with lab-grown cultures of Enterobacter aerogenes, a non-pathogenic bacteria similar to Salmonella.

These were applied to samples of four different surfaces commonly found in the home – stainless steel, ceramic tile, wood and carpet – which were disinfected beforehand to ensure only the desired microorganisms were present. Then came the messy part.

Onto each of those surfaces the team dropped four different food items: watermelon, gummy candy, and both buttered and unbuttered bread. Before being picked up, the foods were left there for different lengths of time – less than a second, five seconds, 30 seconds and 300 seconds – and then analyzed for how much of the E aerogenes had transferred to the food.

“We decided to look into this because the practice is so widespread,” says Donald Schaffner, co-author of the study. “The topic might appear ‘light’ but we wanted our results backed by solid science.”

So does the five-second rule apply? In a way the answer is yes, since in general, the longer a food was in contact with a surface, the more bacteria it collected. But that’s far from the only factor at play.

“The five-second rule is a significant oversimplification of what actually happens when bacteria transfer from a surface to food,” says Schaffner. “Bacteria can contaminate instantaneously.”

It’s probably a good idea to forget about a dropped slice of watermelon, for example. Across the board it was the most easily contaminated food, which the researchers chalk up to its watery makeup.

“Transfer of bacteria from surfaces to food appears to be affected most by moisture,” says Schaffner. “Bacteria don’t have legs, they move with the moisture, and the wetter the food, the higher the risk of transfer.”

The nature of the surface itself contributed to the rate of transfer as well, although surprisingly, carpet was found to be the “cleanest”, transferring the least bacteria, which may be a product of the topography of the surfaces.

Even the fluid that contained the bacteria affected the results.

In the end, the paper concludes that “the risk of illness resulting from deciding to consume food that has fallen on the floor will depend on factors including prevalence, concentration and type of organism, the nature of the food (especially moisture), the nature of the surface topology as well as the length of time the food is in contact with the surface.”