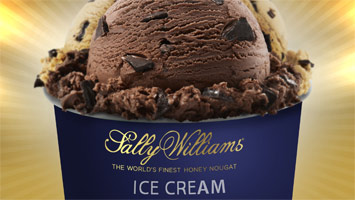 Sally Williams, arguably South Africa’s best-known handcrafted nougat brand, continues on an ambitious growth track – and has just launched its first ice-cream store, which it plans to extend over the next few years.

One of the country’s most successful locally produced confectionery brands, Sally Williams recently opened its first ice-cream store in Nelson Mandela Square, Sandton. The plan is to roll out 40 to 50 of these around the country over the next few years.

CEO Mark Sack said its competitors were brands such as Ferrero Rocher and Lindt, which also target the premium end of the market.

Its nougat and related products, such as Turkish delight, are exported to 23 countries.

Sally Williams started the business in her kitchen 19 years ago, and was later joined by Sack, who helped develop the business from a cottage industry to a commercial enterprise.

The business runs a production facility in Linbro Business Park, Jo’burg, and employs more than 130 people. Sack said the ice cream had either nougat or Turkish delight in it, and was made in a custom-built ice-cream factory about a kilometre from the main production facility.

The plan is to roll out these stores overseas too. The business has an office in the UK, and in Florida in the US.

“It’s not just the ice cream you want to sell; it’s our range of nougat too. And we’ll also shortly be launching a Sally Williams range of gourmet coffee.”

A successful soft launch has already been done and it will launch officially in the next few months.

A premium liqueur produced under licence has been around for about five years.

About 60% to 65% of the company’s turnover is from local sales. The business has been exporting for about 15 years and has won several awards.

“We’re most proud of the Great Taste awards in the UK. That’s viewed as the Oscars of the food industry, which we won around four years ago,” said Sack.

Sally Williams Fine Foods grew market share from 16% of the toffee, caramel and nougat market to 17.5% last year, according to Euromonitor.

Another competitor to Sally Williams is Wedgewood, which positions itself as the “handmade honey nougat”.

Paul Walters runs the family-owned and -run Wedgewood business with his two brothers from the KwaZulu-Natal Midlands. It was started by their mother, Gilly Walters, in her kitchen 18 years ago. About 25% of what they produce is exported to some 20 countries.

Walters said it was a growing industry, and their sales were increasing. “It’s the natural ingredients and a premium indulgence. You want to make yourself feel good on natural, wholesome ingredients.”

Brand extensions include their Angel nougat biscuits, and Racefood, a real food sport nutrition product that is the official energy bar for the Comrades Marathon and Midmar Mile.

Meanwhile, Beyers Chocolates, the largest independent manufacturer of chocolates in the country, bought nougat makers Coach House Confectionery in December. Founder Kees Beyers said the market was relatively saturated with premium nougat, so “we need to do something different”.