Artisanal chocolate makers in SA are encroaching on the domain of mainstream brands, echoing the trend in many parts of the world where growth for premium chocolates outstrips that of the mass market.

Just as is the case with the growing desire for craft beer and speciality coffee, consumers are showing more interest in the source of cocoa beans, darker chocolate and innovative flavours.

The global chocolate market is expected to grow from $83.2bn in 2010 to $98.3bn this year, says global market research company Markets & Markets.

According to Euromonitor, the chocolate market in SA was worth just over R5bn in 2011 and will top R7bn this year. Sales are forecast to reach R8.5bn by 2021.

The chocolate market is expected to grow over the next five years, according to Insight Surveys, in spite of the rising costs of chocolate products and raw materials. Chocolate slabs are the most popular chocolate choice, with more than 50% of the market, but the speciality market is growing fast, following the global trend.

Chocolate Direct, importer of chocolate brands such as Barry Callebaut and SMET, has seen growth in volume of 13% over the past financial year.

“On the gourmet side SA was trailing behind the trend for a long time,” says Liezl Stoffberg, financial manager of Chocolate Direct. “You’d get a chocolate café in Hong Kong where you find beautifully decorated cakes and desserts, and that trend has recently started growing in SA. In decorating and premium chocolate, people are understanding it’s not just about price.”

Stoffberg says there was a dip in 2010 and 2011 but over the past five years the market has grown. “Sales have grown about 20% over the past three years.”

She says SA is a big chocolate-eating country, though certain taste profiles work and others don’t. “We tend to follow the UK in chocolate trends and profiles.

“It’s tough times out there, yet people always seem to have money for chocolates. In our factory shop over Easter and Christmas, we have an influx of people and queues extending outside the building. It’s as if there’s never going to be chocolate ever again.”

Independent chocolate makers and niche players are starting to erode big players’ market shares, which is in line with the global trend around back-to-basics in the food industry.

One of SA’s biggest business giants is dipping into the market. Remgro’s venture capital arm, InVenfin, recently bought a 30% stake in DV Artisan Chocolate, a Paarl-based chocolatier. It’s barely a blip in Remgro’s R150bn investment portfolio, but InVenfin partners with businesses that have the potential to “scale internationally” and brands with a compelling story.

Remgro is a major investor in food brands. It has a controlling stake in JSE-listed RCL Foods and a stake in Unilever. InVenfin also has stakes in tea business Bos and Le Bonbon, a confection specialist. 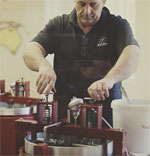 The owner and CEO of DV Artisan Chocolate, Pieter de Villiers (left), was among the forerunners of bean-to-bar chocolate in SA. He taught himself how to make chocolate, with the first commercial chocolate he supplied made in machines he built from home appliances that had been recycled, such as ovens, washing machines, pots and vacuum cleaners.

“I’m loving this. It’s the ability to take something creative by nature and make something special out of it and see consumers love it,” he says. “I’m an engineer with little retail experience. We believed we needed that to guide us through the next five years.”

De Villiers got into chocolate by accident. As a consultant in mining and manufacturing, assisting companies to automate, he went into chocolate-making as a hobby.

“I was experimenting with various things like bread baking and making wine and cocoa beans to bars, and we migrated from a mom-and-pop into Woolworths.”

It produces chocolate from cocoa beans sourced from African cocoa farmers, and the plan is to grow the company’s retail footprint. De Villiers says the value chain in the process is complicated and fragmented.

“We go directly to the cocoa bean farmer and buy directly. What that gives is an ability to play with flavours based on the raw material. Typically, chocolate manufacturers would buy cocoa liqueur and add flavours. We go to the source and ensure sustainability and fair pricing to farmers.”

DV has been operating for only 5½ years and produces 3.5t of chocolate a month. Another factory outside Paarl is being commissioned which will allow it to produce 20t/month. InVenfin wasn’t the only suitor. But others wanted the business to streamline to as few products as possible. “The artisanal world is very different from the mass-driven commercial world.”

DV Artisan Chocolate sells only through Woolworths and its own retail outlet in Paarl, and is opening another in Franschhoek in November. Five more outlets are planned in SA.

“We’ve identified a niche segment we can grow a business in. Because of the African story it has the potential to grow exports, not now, but in a year or two.”

Exporting to the US and the UK is under consideration. The company has also had inquiries from the Netherlands, China and Singapore.

“In Belgium, people consume about 10kg of chocolate a year. In SA it’s about 1.1kg a person a year; chocolate consumption is not high on the agenda.”

That means in a country of about 52m people, about 60,000t of chocolate are consumed annually. Belgium has 10m people and the market consumes about 110,000t/year. “Chocolate market consumption is double the size in Belgium and yet the country is one-fifth the size.”

Though his company is the largest independent chocolate maker in the country, Beyers says he would list it as an artisanal manufacturer because a lot of the chocolate is created by hand. There are 350 employees.

Premium chocolate is growing faster than mainstream chocolate, he says. There has been a move to dark chocolate, but most of the market still prefers milk chocolate.

Beyers Chocolate has been in business for 29 years. It produces just over 100t/month and sells mainly through hotels and supermarkets such as Woolworths, Pick n Pay, Checkers and Spar.

About six years ago the company started its own house brand, which is now the fastest-growing segment.

The company exports a small amount to Canada and the US, but 95% of turnover is sold locally. Beyers says the industry is under pressure because in the past 24 months, the price of raw materials has doubled due to the cocoa price increase and the weakness of the rand.

The worldwide retail market for chocolate rose 6.7% to $101bn last year, according to research house Euromonitor International. Consumers want more premium cocoa products, at a time when demand for conventional chocolates in mature markets like the US and Europe is weak. Chocolate with higher cocoa content is healthier.

Heinrich Kotze of Cocoa Fair says South Africans’ tastes are evolving when it comes to chocolate. “We are seeing an increasing interest in darker or higher cocoa percentage chocolates.”

He attributes this to a higher level of awareness and appreciation for quality chocolates, as well as a move away from high-sugar-content products.

And people are more interested in trying new flavour combinations. “In terms of the total size I do not believe we have even scratched the surface of the chocolate market.”

He adds that Beyers, with a wider distribution in retail, is making inroads into the big brand names.

“One of the challenges we face on the premium side is that there is still a view that anything Belgian, Swiss or European must be good. I do not believe this is the case as our chocolates do stand up to the best in the world,” says Kotze.