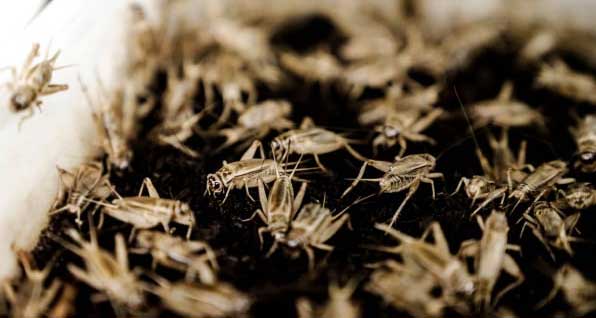 24 Aug 17 On the road to mainstream cricket protein production

If bugs are the next big food trend, we need to find a way to grow a lot of them. US cricket company, Aspire, has turned to robots.

Inside a new building in an industrial neighbourhood near the airport in Austin, Tesax, a robot is feeding millions of crickets, 24 hours a day.

The facility–a 25,000-square-foot R&D centre (2300m2) that opened this month for the startup Aspire–uses technology that the company plans to soon duplicate in a farm 10 times as large. It’s a scale that the startup thinks is necessary to begin to make cricket food mainstream in the US.

Eating bugs–or at least products made from bugs–has been growing in popularity. For a few years, it’s been possible to buy cricket snacks such as protein bars made with cricket flour or cricket chips (like Chirps) at some grocery stores or online.

But for insect food to fulfill its sustainable promise of supplying protein without the massive carbon and land footprint of beef, it will have to be much more widely available, and more affordable. Aspire believes its farms can make that possible.

Right now, “insect protein products sold in North America are a premium product,” says Mohammed Ashour, CEO of Aspire, which launched in 2013 after the founders–students at the time–won the $1 million Hult Prize for their business plan for edible insects.

“It’s very expensive. A pound of cricket protein powder right now at wholesale sells for approximately $20. That’s not because of an artificial, significantly inflated gross margin–that’s simply because the cost of production is very high.”

A pound of cricket powder includes between 4,200 and 4,800 crickets. While non-cricket protein powders vary in price, a pound of a cheap powder can wholesale for as little as $10.

The new system uses a robotic module that travels around the farm, depositing the ideal amount of food; sensors use machine learning and AI to monitor how the insects eat and when they need more.

In the past, farmers worked standard business hours; crickets are nocturnal. “You end up dumping a very significant amount of food at the end of the day and hope that it will last overnight,” says Ashour. “That may work, but it’s definitely a very inefficient and not an appropriate way to deliver food in a cricket-centric way.”

Using analytics, the company was also able to modify the cricket’s diet to produce a higher-quality end product with more protein and fewer carbs.

The crickets mate and lay eggs in a dedicated breeding space, and then the hatched eggs are moved to a bin where they grow until harvest. Each bin is monitored with the company’s own sensor technology, and each aspect of the cricket’s life, from hatching to harvest, is automated as much as possible.

The company has seen a tenfold increase in production with the system. Because manual labor at the farm previously accounted for 75% of the cost of goods, the system can make cricket-based food cheaper to buy.

Aspire sells cricket flour to other manufacturers in the burgeoning insect food space, and also sells its own line of products, called Aketta, to consumers. Both consumer and retail demand have grown more quickly than the company initially expected. In March 2017, it started selling bags of whole, dry-roasted crickets, partly to test demand…..