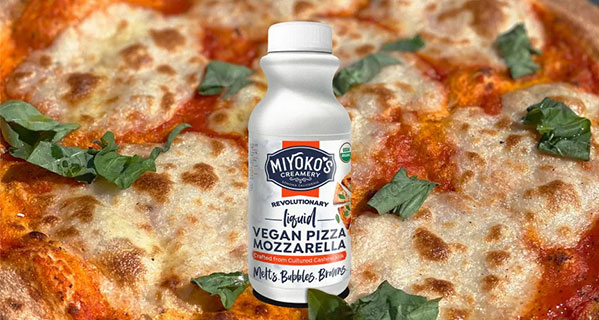 The uber plant-based trend is giving rise to some very novel food science/tech innovation. For instance, shredded vegan cheese is notoriously difficult to melt, so this US vegan dairy company decided to rethink the entire product.

A classic part of the pizza-making process is layering on the cheese — sprinkling shredded mozzarella atop of the tomato base, enough so that the shreds will melt and spread into a uniform, stretchy layer. This simply won’t happen with vegan cheese.

Dairy cheese melts, stretches, and bubbles so well because it has casein, a protein found only in the milk of mammals (click left to learn more about the problems of vegan cheese). To get around this problem, US vegan dairy company, Miyoko’s, decided to think beyond the typical cheese form.

“This was the team coming together and thinking about okay, how do we solve this age-old problem of vegan cheese not melting? And the idea came up, why don’t we just not worry about the initial form? Why don’t we just completely think outside the box…,” says Miyoko Schinner, founder and CEO of Miyoko’s Creamery, which has been making dairy-free products including cheese and butter since 2014 (Schinner, herself a chef, has been making vegan butter and cheese for about 30 years.)

For other vegan cheeses, both shreds and slices, the first ingredients are usually water, oil, and starch. For Miyoko’s liquid mozzarella, the first ingredient is cashew milk (there is also sunflower oil and tapioca starch, farther down the list). Instead of adding starch to get the cheese to solidify and then trying to get the starch to melt again, “why don’t we just get it to solidify?” she says. “That was the approach.”

Starting with cashew milk is also in line with how the company approaches all of its cheeses. “Our approach has always been to make cheese like dairy cheese using plant milk instead of cow’s milk,” Schinner says. “Inoculate it with bacteria, yeast, and molds, with a little bit tweaking, because plant proteins don’t behave the same way as cow’s milk proteins do.”

Other companies have grown dairy proteins in a lab; to Schinner, that still associates food with animals, something as a decades-long vegan she’s trying to help people move past.

“The trick is that dairy science has had 2,000 years to figure out how to make cheese,” she says. “We don’t know much about plant milks, we don’t know what type of proteins are in different plants.”

The company also focuses on research into different plants and their proteins; one is watermelon seeds, which are high in the protein globulin that Schinner says can help with coagulation.

Miyoko’s has been working on another version of its liquid vegan pizza mozzarella that uses watermelon seed milk instead of cashews, so that there’s a nut-free and allergen-friendly version available; that’s just now becoming available exclusively for food service. (The company is also working on a watermelon-seed-milk-based cottage cheese expected to launch early 2023).

Using a different protein source means trying out different bacteria and fermentations, too, because they can react differently; the company had to adjust the cultures it used for watermelon-seed milk, because lactic acid created some “off” flavours.

When Miyoko’s first began testing its (cashew) liquid vegan mozzarella, Schinner wasn’t sure how customers would react. The work on this product began about two years ago, and early on the company approached a small California (non-vegan) pizza chain to launch the liquid cheese with them around the beginning of the pandemic. It was a hit, she says, saying about 9% of the chain’s sales are now vegan pizzas.

Schinner then wasn’t sure whether customers would buy the liquid cheese retail, because, she admits, it’s a bit out there — would they get it? But when viewers saw her cooking with it on a Facebook Live cooking show, they asked for it. Miyoko’s first sold it directly on its ecommerce site, listing 600 bottles that sold out in an hour, and then launched with the grocery store Sprouts in mid-October. In the first month, she says, they sold around 10,000 units.

The liquid vegan pizza mozzarella ​​was a winner at the recent 2022 Expo West NEXTY Awards and will expand into additional retail stores this spring.

That reception is an example of how companies can sometimes underestimate consumers, she says. Liquid vegan cheese may sound a bit “out there,” but it turns out, it’s not unappealing (overall, Schinner says about 60% of people buying Miyoko’s products aren’t strictly vegan, according to market research the company conducted about a year and a half ago).

Now, Schinner wants to introduce her customers to more products they might not even know they’d like, or try.

“Market research is always a rearview mirror looking at the past, and disruption happens when you show the world something that they’ve never seen before and all of a sudden, everyone needs a thing they didn’t know they needed,” she says. “And so we think maybe the liquid mozzarella is that.”