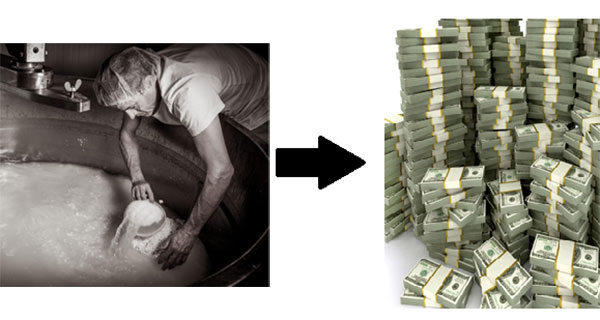 There’s value waiting to be recovered in many wastewater streams, including the water itself.

Economical disposal of the water that food and beverage plants have left over after processing and cleaning is a major problem for most plants. Usually that means reducing the volume as much as possible; in many cases, it means cleaning the water up before discharge to avoid crippling surcharges (or outright rejection) from the local municipal water treatment plant.

But a good way to mitigate the expense of wastewater is to put it to work, so to speak. That means using or selling substances that are extracted from the water in the normal course of cleaning it up, or even reusing the water itself, internally or otherwise.

Strategies for “mining” wastewater depend on the volume and nature of the wastewater itself, which is determined by a plant’s pre-treatment methods.

These will almost always be decided by considerations such as the maximum allowable parameters for volume and pollution metrics, as well as the plant’s physical constraints and capacity; does it, for instance, have the room for a big settling pond needed for aerobic treatment?

Recovery options are usually a secondary consideration, but they have the potential to take a big bite out of treatment costs.

Whey goes from dog to diamond

Whey used to be considered a nuisance that elevated wastewater’s biochemical oxygen demand (BOD) load, a measure of how much oxygen in fresh water a wastewater stream will wipe out. At best, it was furnished to nearby farmers, if a plant was lucky enough to have any around, to spray on their fields.

But “whey protein concentrate” is now in demand, as an ingredient that boosts the protein content of a range of products (or on its own, as a powdered nutritional supplement). Some water treatment system suppliers can help make this happen.

“We offer a range of technologies for the separation of milk solids or demineralization of whey, both of which are common dairy applications,” says Michael Hribljan, vice president for food & beverage at Suez Group.

“For example, Suez’s electrodialysis systems can be used to further process (demineralize) whey into reduced minerals whey, which is a profitable product that is used in infant formula, ice cream, energy drinks, dry mixes and other food products.”

Other solids have a longer history of recovery from wastewater, like barley and other solids from process water used in brewing, which has long been used as cattle feed. Some of these spent grains are now getting “upcycled” into human food such as energy bars.

Another potential treasure in wastewater comes in the form of methane. It’s produced as a byproduct of anaerobic digester systems, which use fast-acting bacteria to break down chemical wastes in water.

Anaerobic wastewater treatment often yields methane gas that can be harnessed and used for energy.

Methane is normally a nuisance gas, some 25 times worse than carbon dioxide in terms of its impact on the environment. For this reason, it’s often burned off. But capturing it and burning it off strategically, to generate electricity, can be a way to reduce energy costs.

This has been done by municipal power plants for years; private treatment plants are beginning to get in on the action. Methane generation produces power at breweries owned by Anheuser-Busch, MillerCoors and New Belgium Brewing, and at a yogurt plant owned by General Mills.

Several possibilities exist for energy produced from methane by-product, Hribljan says: “Our anaerobic digestion technologies can help food processors convert high strength effluent or solid wastes to biomethane gas. This gas can then be used on-site in boilers for heating and steam applications in the factory or combusted to generate electricity. It can also be processed into renewable natural gas and injected into the grid.”

But reusing the water itself is arguably the most promising recovery strategy for wastewater. It’s the most broadly applicable; it usually reduces costs, and it strikes a sympathetic chord with many consumers (and others) who find clean water a vital issue.

PepsiCo and other companies have a long-term goal of being “net water-positive” – that is, replenishing into local at-risk watersheds as much or more water as its plants take in.

The easiest, most common way to use reclaimed wastewater is by “downcycling” it within the plant – using the water internally for some purpose that doesn’t require it to be potable, or as clean as it originally was.

For example, it’s common to take rinsewater from the final, sanitising phase of a clean-in-place cycle, store it and use it as the first-step prewash of the next cycle. Since its only function as prewash water is to loosen heavy soil from internal surfaces, the sanitising chemicals still present in the rinsewater won’t matter.

Wastewater pre-treatment often brings the option of recovering substances from the water, or using the water itself, to mitigate costs.

Down-cycling is the low-hanging fruit of water strategy; it’s relatively easy to accomplish, and the returns of lower water usage are immediately apparent.

But for a company that wants to drastically change its water-use profile, down-cycling isn’t an adequate long-term strategy, simply because most applications can’t use that much down-cycled wastewater…..