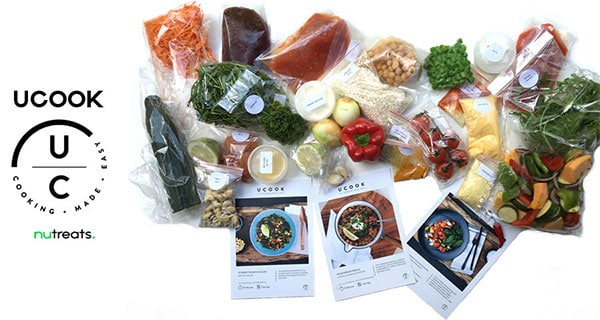 From start up three years ago, South Africa’s most popular meal-kit delivery service, UCook, is enjoying mouth-watering growth and estimates it will hit some R80m in turnover this year.

David Torr, its CEO and co-founder, has come a long way since being expelled from a top SA school and voted “most likely to end up in prison” by his copywriting peers at Red and Yellow creative school.

UCOOK came about in 2014 when Torr and his pal, Chris Verster Cohen, noticed a gap in the market for convenient, healthy dinner solutions.

After officially launching the business in 2015, they were quickly joined by a few friends, and proceeded to operate the young start-up out of a garage in Cape Town, packing each box themselves.

From 24 boxes in their first delivery round to tens of thousands in 2018, a warehouse space in Joburg and Cape Town, and now a team of 50, UCOOK has established itself as South Africa’s favourite dinner kit service in just three years.

UCook is now close to delivering 100,000 meals a month and predicts it will hit R79.5-million in turnover by the end of the year.

“Considering running revenues at the start of this year were around R3-million, we consider this a great achievement,” Torr says.

“I figured the commercial opportunity was interesting with factors like Woolworths’ strength in a period of relative economic decline and the success of brands like Yuppiechef selling ‘cooking utensils’,” Torr, now 28, says.

Woolworths and Yuppiechef’s success, Torr says, show that people are willing to spend money on good quality food – and that the early adopters of e-commerce in South Africa enjoy cooking.

Torr believes their customers appreciate what he calls “the incorporation of alternative USPs” – ethical eating, for instance.

“…This is reflected in UCOOK’s food philosophy (organic, sustainable, meats pasture-reared and free-range) and a ‘learning and upskilling element’ reflected in the multiple campaigns and menus created by top industry professionals (Eat Out Chef of The Year, Liam Tomlin, Franck Dangereux etc) and popular restaurants.

“These value-enhancing properties have allowed UCOOK to achieve a customer average lifetime value that supersedes the model’s expectations.”

That’s not to say UCook made some mistakes along the way.

“On our first day in 2015, for example, we delivered all of our meal boxes, but failed to deliver any recipe cards. We went from 21 orders of mainly family and friends, to zero,” he recalls.

Stores in the pipeline

Torr says after three years in business delivering recipes and ingredients, UCook has a wealth of valuable consumer food preferences data it plans to use to in the development and launch of brick-and-mortar stores towards the end of 2019.

It follows in the footsteps of online kitchen and homeware group Yuppiechef, which recently open its first brick-and-mortar store in the Cape Town.

“Two stores are being planned with an offering that extends across other ready-made meal categories as well as condiments and sauces,” Torr told Business Insider South Africa.

Despite never being characterised as a budding entrepreneur during his youth, this didn’t stop David Torr from creating a successful food business ripe for the modern era.

David, the co-founder of uCook, tapped into the desire of many busy South Africans who don’t want to miss out on healthy eating.

The meal kit delivery service is now thriving, with plans to expand its product range in the near future.

But it was an unexpected turn for the entrepreneur, whose attempted venture as a restaurateur failed when he was 17 years old.