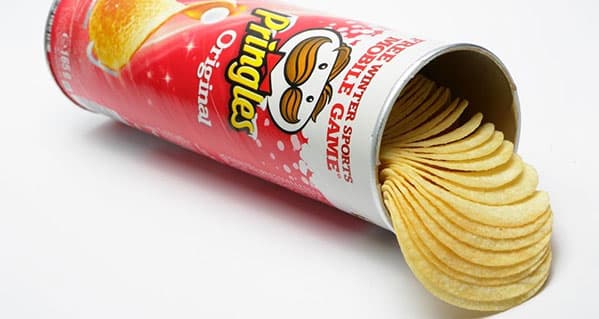 17 Jul 22 Pringles: The recipe behind this irresistible snack

The processed crisp brand is still growing half a century after it was invented by scientists…. Here’s some interesting commentary on just why it’s so enduringly popular….

Amid such company, no one would mistake Pringles for a healthy or a posh treat. Yet when Kellogg announced plans to break itself into three separate companies recently, it did not place its biggest bet on the Corn Flakes invented by the Kellogg brothers in 1894. Instead, it emphasised the prospects of savoury snacks, led by its inimitable brand of processed crisps.

Pringles is thriving, despite having started out as a commercial flop for the Procter & Gamble research chemists who invented the saddle-shaped snack in the 1960s as a competitor to potato chips. Other snacks, from cereal bars to biscuits, are also selling briskly as people turn from eating three meals daily to regular grazing, but this one excels.

What are its secrets? One is its consistency.

Pringles last for an unnervingly long time; the ones I bought are only due to expire in July next year. They are not exactly fresh, but neither will they start to grow stale until the tube is popped: they could be shelved in a warehouse for months, or carried by container ship to Australia, and emerge still edible.

This was the original point of processed food, after all: its extreme dependability and stability. Pringles were a product of the postwar age of convenience: the first research was done in the late 1950s by a P&G employee called Fredric Baur, who had a PhD in organic chemistry, and they were launched as “Pringle’s newfangled potato chips” in Indiana in 1968.

The same quality now makes them peculiarly suited to global expansion: as one Kellogg executive remarked after it acquired Pringles from P&G a decade ago, “Fantastic brand. No matter where you go in the world, you’ll find the exact same product.”

Pringles is doing well in the US and Europe, but the brand has been growing even faster in newer markets such as Mexico, Turkey and Brazil.

A second secret is versatility.

It took P&G a long time to perfect Pringles because it was difficult to make processed discs of dehydrated potato, cooking oil and flours taste of very much. This was also the space age, and Pillsbury was producing food cubes for Nasa’s astronauts, but consumers on earth had a choice. Blandness later turned out to be useful: it formed a blank canvas for plenty of flavours.

The brand took off in the 1980s after it stopped trying to mimic natural crisps and pursued novel sensations instead. Pringles could never be mistaken for the real thing, but they offered something else.

Pringles now has 30 flavours in the US alone, including Scorchin’ Chilli and Lime, and Sizzl’n Kickin’ Sour Cream. Mondelez acquired the organic energy bar maker Clif Bar for $2.9bn this week, but Pringles hews to the mass market: gram for gram, it is cheaper than many crisp brands.

Whether Pringles are healthy is another matter. Even Steve Cahillane, Kellogg chief executive, did not overpromise for his property when I spoke to him: “I wouldn’t say it is at the far end of indulgence, but it is clearly not a wellness brand,” he said.

The “Global Snacking Co” containing Pringles and Pop-Tarts that Kellogg will create is part of a trend: companies such as Mondelez, which owns Cadbury chocolate and Oreo biscuits, are growing.

A Mondelez survey last year found that 64 per cent of consumers in 12 countries now prefer to eat more small meals each day, and are keen on what it calls “permissible indulgence.”

It is no coincidence that many are also getting fatter: about 70 per cent of American adults are overweight or obese. The problem was neatly encapsulated by Pringles’ 1990s advertising slogan, “Once you pop, you can’t stop,” which it has since shelved.

Snacks companies are acutely vulnerable to the charge of encouraging insatiable eating…..