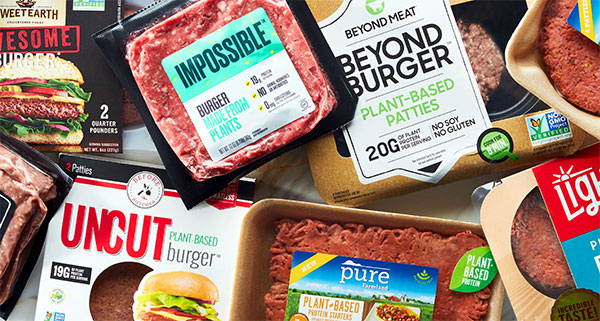 As meat analogues and plant milks continue to ride a wave of optimism, take a closer look at the plant-based category with Paul Hart, an expert in plant proteins.

With a career in the world of food science spanning over 40 years, Hart has taken wide-ranging roles in the industry, from ice-cream and dairy to corporate communications, before focusing on plant proteins. Here, founder and MD of UK thinktank New Nutrition Business, Julian Mellentin, talks to him about challenges around protein functionality, the nutritional and pricing paradox of Impossible and Beyond Burger, and better alternatives to soy and yellow split pea.

JM: With all the news about investments in plant-based products, companies could be tempted to see such products as risk-free. Are there any potential challenges?

PH: To deliver a product which has really 100% plant ingredients, the challenge is going to be around functional protein. Take an egg, for example: An egg has functional protein, meaning it’s soluble, it foams, it emulsifies a bit, and you can certainly make a jolly good quiche from an egg – that’s gelation. However, not all plant-based proteins have all these functionalities.

There are two aspects to plant-based proteins: one is to provide the bulk – to dial up the macronutrient protein level – and the other is functional – providing structure and texture – often at a lower value. The problem is that seeds and nuts are insoluble and have low functionality. That’s why plant-based milk often has a layer of something on the bottom that’s not in solution!

What are the plant sources that contain functional proteins that companies could use?

At the bottom of the functional hierarchy (see Table 1) we find fermented proteins from algae or yeast, and insoluble potato protein that many starch companies will produce for animal feed. They don’t do anything because they’ve been sterilised through cooking. Just like cooked egg white, there’s a limit to what you can do with cooked proteins.

Next in this hierarchy are cereal proteins, like wheat gluten or oat, and then oil seed, soy, canola, hemp and sunflower. But then we’ve got the “new soy”, which would be yellow split pea protein. Then other legumes like fava bean, broad bean, mung beans, which have some functionality, although they don’t gel particularly well.

To get the high functionality proteins you need clean green modern separation technologies that don’t involve so much heat.

Why is yellow split pea the “new soy”?

Because it’s not an allergen and it doesn’t have quite the issues around trypsin inhibition activity. Every protein from the plant kingdom comes with an anti-nutritional factor and there are ways to remove it, like heating, soaking and fermenting. In Asia, the ancestral way of dealing with soy is to ferment it. But feeding soy beans directly to humans can bring trypsin inhibition activity, which is a tiny protein that blocks proteases in your gut and thereby limits protein digestion and uptake.

It seems like it’s more difficult to develop a quality food product with 100% plant protein than with an animal source protein.

I think that’s correct. And historically looking back 10 years, that was a particular problem with gluten-free products. Getting a functional plant protein that will work well in a gluten-free system is tricky, and there’s been a lot of dependence on gums and stabilisers.

Some plant proteins, like pea and soy, are widely available, used by many food companies in their products and people eat them. Are there any drawbacks to using yellow split pea or soy beans?

The consumer product that’s most widely available is a plant-based burger that for meat eaters might match the taste and texture of a ground beef burger. Why would vegans want something that looks like a meat burger? My suspicion is they probably don’t. What’s going on here is something to appeal to Flexitarians – people who feel a bit guilty about eating meat and want to go meat-free on a Monday or ‘do’ Veganuary after Christmas.

However, these alternative meat burgers are vastly more expensive than ground beef. And right now there are two big USA companies producing these products: Impossible and Beyond. The Impossible Burger is based on soy and is extending to Asia. It has a GMO yeast-fermented soy leghemoglobin which gives it a blood-red look when people bite into it, which is something they’ve boasted a lot about in their PR in recent years.

However, the Impossible Burger hasn’t entered European markets yet because the European Food Standards Agency needs to consider a safety dossier for the GMO leghemoglobin. Recently we have come to understand that this prevents sales in China too.

By and large GMO ingredients are a big red flag to a huge number of consumers in Europe. So it’ll be interesting if they try to market it using the GMO-based ingredient. The Beyond Burger, however, uses pea protein, and that is available in the European market, and also in the UK where it’s available in Tesco supermarkets. Beyond have moved from toll production in the UK to their own production facility in the Netherlands. That is a slightly more benign way of doing things and has a broader acceptance.

This problem can be resolved by balancing a legume with something that’s lower in lysine, like a cereal protein. It may come as a surprise, but most ancestral and recent cultures have a cuisine where you have beans and cereals together. For example, beans on toast in the UK, or daal and rice in India etc.

Some traditional ways of eating produce the right balance of amino acids that our bodies need. Do we get the same balance in Impossible and Beyond burgers?

In plant-based burgers, that doesn’t happen. It’s either all soy and not much else, or all pea protein and not much else. Immediately, you will have something that’s going to be out of whack with respect to a steak, or a dairy protein reference like whey.

But there’s more: looking at the ingredient profile on some of the plant burgers, we see a slightly odd thing. The Impossible burger has something in the region of 20 ingredients, and Beyond in earlier formulations had over 20.  So you’re getting almost two dozen ingredients to make something similar and these additives are not kitchen cupboard ingredients…..