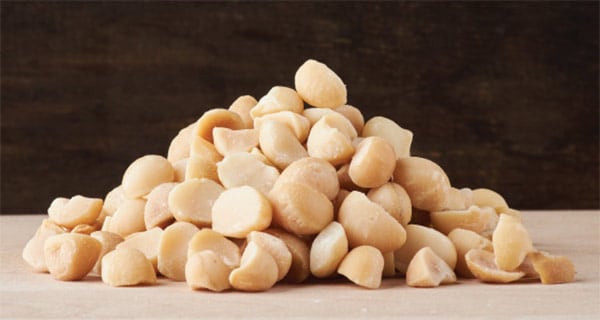 07 May 19 Pioneering macadamia as a food ingredient

As part of its investment into an ongoing project to inspire macadamia NPD, G&G hired a leading development lab to trial macadamias as a dairy alternative in various foodstuff, in this instance a mushroom soup, mango smoothie and yoghurt.

The most outstanding finding, says G&G, is due to their high healthy fat content, macadamias have significant and stable emulsification properties. This means little to no product separation together with the preservation of creamy texture.

Additionally, they are neutral in flavour (unlike coconut, for example) which makes way for a variety of uses, sweet, salty and otherwise. They are also an excellent flavour carrier, again due to the high fat content.

Focus group findings supported that, from both taste and texture perspectives, participants could not tell that macadamia was used instead of milk for both the soup and the smoothie.

The yoghurt texture resembled that of dairy yoghurt, however participants could taste that macadamias we used – for some that was positive, for others not.

Acceptance and preference testing received a variety of scores, some being preferred in blind tests with large corporate brands.

“To meet objectives of transforming the global food system, it is estimated that the consumption of nuts needs to double by 2050.

“Macadamias currently are small in supply by comparison to other nuts, but this is changing rapidly. Exponential increase in available product presents remarkable previously unexplored opportunity for the macadamia industry.”

“It is only a matter a time before macadamias take their rightful place alongside, and at times supercede, other nut counterparts in dairy alternatives, bakery, butters, pastes and others,” he continues.

“Not only of the health trend/necessity of plant-based eating – but also its intersection with better preserving our planet – is being understood and adopted. Many of our customers are strategically focused to reorient their business in support of plant-based foods.

“We have long believed in the potential of macadamias – from their unique health, taste and textural benefits through to their perception of being rare and luxury.

The G&G team is infinitely buoyed by what this initial foray into how the future looks for how macadamias are consumed. Increases in supply means the industry will no longer play second fiddle to the larger nut counterparts in this sector,” concludes Loader.