Phil Roux (above) will retire as CEO of Pioneer Foods, SA’s second-largest food group, effective October 1, but will continue to serve as strategic adviser to the company until November 30, 2019. 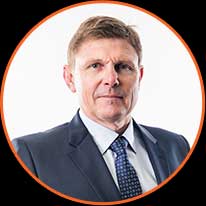 Tertius Carstens (left), who is the business executive responsible for Pioneer’s essential foods division, will take over as CEO of the group on October 1.

“Phil has been an asset to the company and has brought about significant positive change. He was responsible for implementing an improved operating model and made some strategic acquisitions including the joint venture with Futurelife, the Weetabix Kenya acquisition and Food Concepts Nigeria,” commented chairperson KK Combi.

“We have a strong balance sheet with ample capacity for growth and our embedded strategy should ensure margin recovery and growth going forward.

“The senior leadership team has benefited from [Roux’s] experience and approach and his contribution to the company has been very valuable. We look forward to continue having access to his expertise in an advisory capacity as we enter the next phase.”

He added that Carstens is “exceptionally qualified” and respected among the group’s stakeholders.

“His strong record and depth of knowledge and experience across all aspects of the organisation makes him the ideal candidate to assume the role of CEO,” said Combi.

The group has also made a number of other recent appointments, including that of Felix Lombard as CFO, effective July 1 and Martin Neethling as business executive of the groceries division, effective July 1.

Meanwhile, Riaan Heyl has been appointed to succeed Carstens as business executive of the essential foods division, effective October 1.

Another view of Roux’s departure – from BusinessLive.co.za

Despite a reassuring tone in the accompanying Sens announcement, Pioneer’s shares were unceremoniously marked down almost 7% to a new 12-month low of R118.

Roux — a former Tiger Brands executive — joined Pioneer in May 2013 and has been credited with revitalising the company’s fortunes by focusing on its best-selling brands and implementing a successful cost-cutting regime.

When Roux took the helm, Pioneer’s share price was about R77. By October 2015, the price had breached the R200 level but retreated in the last 18 months as tougher trading conditions took hold in the consumer sector.

A trading update released in mid-August disclosed that turnover at Pioneer – which holds brands such as Sasko, Bokomo, Marmite, Redro, Liquifruit, Moir’s and Ceres – decreased 4% for the 10 months to end-July 2017.

At that time, Pioneer maintained it would be judged on its ability to increase market share in a contracting environment, the restoration of margins and overall financial performance in relative terms.

The company said management was “positive that 2018 will portend greater upside and a recovery opportunity for the company at large”.

Even with the depleted price, the share has still grown more than 50% under Roux’s leadership. Friday’s market reaction to the retirement news confirms that shareholders expected Roux’s tenure to be more enduring.

Market watchers mostly concurred that Roux had ticked all the boxes in transforming Pioneer, save for delivering on a large offshore deal.

The retirement announcement also sparked speculation — the most notable being a theory that Roux and the company’s main shareholder, PSG (via Zeder), might have differed over an acquisition strategy in the dour trading environment.

Roux told Business Day he had “run very hard” in the past few years and it was time to take a break. He said Pioneer remained a robust food group with strong assets and brands.

Pioneer chairman KK Combi stressed the company had made an effort to build leadership depth.