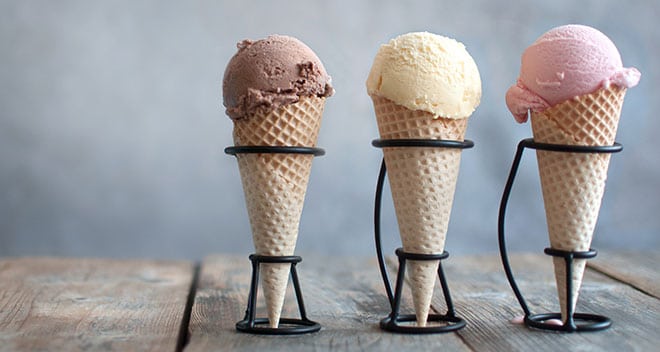 Perfect Day got its start five years ago in Ireland by participating in a Cork city-based accelerator programme backed by entrepreneur and former Dragon’s Den star, Sean O’Sullivan.

Perfect Day makes its dairy by genetically modifying microflora to produce the two main proteins in milk: casein and whey. They combine the dried proteins with plant fats, water, vitamins and minerals to make a lactose-free product that has the same properties – claiming it has the taste, consistency and nutritional breakdown – of milk.

While the company was initially focused on producing cow-free milk, the limited-edition synthetic ice cream is the first of the company’s products to hit the shelves.

According to co-founder and CE, Ryan Pandya, the company decided on ice cream as its first product because it’s “synonymous with dairy delight”, and because there’s currently not a really good plant-based option for ice cream on the market.

“They all lack the right mouthfeel,” he says.

It quickly sold out of limited-edition bundles of milky chocolate, vanilla salted fudge and vanilla blackberry toffee ice cream, which were retailing for $60.

Formerly known as Muufri, the company was founded when Gandhi and Pandya came together five years ago to apply for RebelBio, the world’s first life sciences accelerator programme, which was initiated and run by O’Sullivan’s venture capital firm, SOSV.

The company received about $50,000 (€44,361) in seed funding when it joined the accelerator, and was given lab space at University College Cork and guidance from entrepreneurs such as O’Sullivan and CoderDojo co-founder and SOSV partner, Bill Liao.

Perfect Day, which is now headquartered in California, has since gone on to raise more than $60-million in investment, as it looks to bring a range of synthetic animal-free dairy products to market.

“What we’re doing here is completely new to the world,” adds Pandya. “We wanted our first debut to be under the care of our own brand, so that we could demonstrate the consumer benefits inherent to our protein, while starting a conversation about this new approach to making food.”

“Our goal has always been impact – to pave the way for a kinder, greener planet,” asserts Gandhi.

“The best way to achieve this will be to work with food companies that already purchase huge amounts of dairy ingredients. While our B2B deals come to fruition, we are eager to share our progress with the world.”