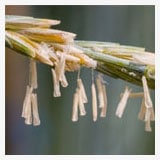 Introducing Kernza, a new breed of wheat. Could this little seed help save the planet?

Unlike the usual varieties, Kernza is perennial, which means it grows back in subsequent years rather than being sown each spring. That matters because over time, the plant develops a deep, dense root system that helps to build healthy soil and to keep carbon in the soil, a counter to climate change.

No wonder perennial grains have long been the holy grail for a certain set of agroecologists (visionaries or eco-weenies, depending on your perspective). Now there is Kernza in my kitchen. And, it turns out, in other places, too.

Patagonia Provisions, a new division of the outdoor gear company, has released the first commercial product made with Kernza, Long Root Ale. The Perennial, a new restaurant in San Francisco, is serving it, along with its house-made Kernza bread and crackers and a deliciously toasty Kernza ice cream.

In Minneapolis, close to a large Kernza test plot, chefs and food artisans are using Kernza in tortillas, muffins, pasta and more. Minnesota-based General Mills is also evaluating the grain.

One drawback to Kernza is the small size of its seeds, which are one-quarter the size of a conventional wheat berry. The Land Institute has been working to create Kernza plants that grow larger seeds.

The commercial availability of Kernza is something of a dream come true for the academics who have long evangelised perennial grains. Here in the United States, its main proponents are at the Kansas-based Land Institute, where it was developed. Co-founder Wes Jackson first became an advocate of perennial crops in the 1970s after noting a difference between the soils on agricultural lands and those in the native tallgrass prairies.

On cultivated fields, Jackson saw soil eroding and nutrients, mostly from chemical fertilizers, leaching into nearby rivers and streams. In contrast, the prairie’s diversity of plants and absence of annual tilling resulted in rich, healthy soils. Jackson wondered whether it was possible to redesign agriculture to better mimic Mother Nature…..