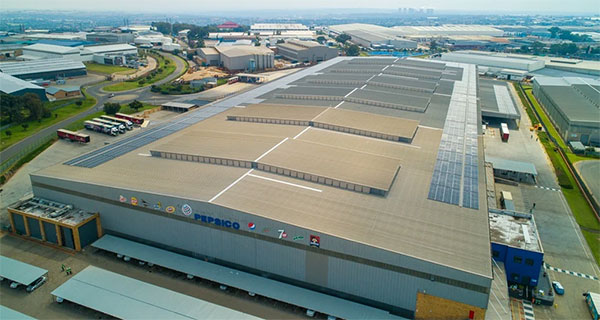 PepsiCo is rapidly adopting solar power at its facilities throughout South Africa and hopes to rely solely on renewable energy by 2030.

With environmental and carbon emission concerns moving up the agenda, PepsiCo is also moving to solar power in a bid to be independent of Eskom and South Africa’s volatile energy grid.

“In South Africa, we are planning to achieve 100 % renewable electricity by 2030 in our production sites,” said Abdullah Khawaja, PepsiCo sub-Saharan Africa sustainability lead.

One of SA’s largest microgrids

“Our PepsiCo Park distribution centre recently obtained municipal approval in Ekurhuleni to connect a large solar PV plant and battery system. The plant will form one of SA’s largest microgrids, comprising a 1.8 MW solar PV facility alongside a 2.9 MWh battery, while being grid-connected to stabilise the local grid.”

PepsiCo aims to draw 8% of its electricity from the sun by the end of the year. The company’s existing solar power projects have the capacity to generate 5,474 MWh of electricity annually.

It’s cost PepsiCo roughly R120-million to reach this point, and with the latest addition of its solar-powered distribution centre, it expects to save more than R3-million in electricity costs per year.

To achieve its goal of 100% renewable energy by 2030, PepsiCo said it would also engage with Independent Power Producers.