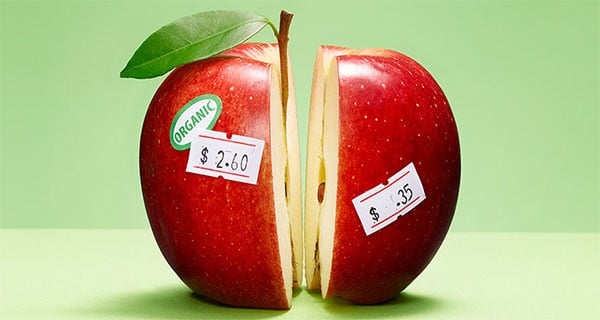 Organic food, say organic farmers, is better for the environment and produces healthier, tastier food. Except that it isn’t, and it doesn’t. It’s a money-making racket which is rooted in esoteric mysticism, not science. Another provocative article from the inimitable Ivo Vegter, Daily Maverick opinionista.

Organic farming has its roots in biodynamic agriculture, a system of farming advocated by the esoteric philosopher Rudolf Steiner in the late 19th and early 20th century. Steiner was a weird fellow who tried to reconcile science and spirituality and believed that the spiritual world was accessible to the human senses and intellect.

His ideas, known as anthroposophy, live on today in alternative approaches to medicine, biology, agriculture and education. It has been widely derided as pseudoscience, occultism, quackery, and a dangerous cult.

Biodynamic agriculture contains useful elements, such as considering a farm as an ecological unit, but it also includes practices from astrology and sympathetic magic. It is fundamentally unscientific.

As just one example, take Patrick Holden, who was the director of the Soil Association from 1995 to 2010, was the founding chairman of British Organic Farmers in 1982, is a patron of the UK Biodynamic Association, is a founding director of the Sustainable Food Trust, and is a Commander of the Order of the British Empire for his services to organic faming.

In an interview with The Guardian, Holden references Steiner and speaks approvingly of the role of homeopathy and astrology in farming. He cites the late Agnes Fyfe, an astrologer-alchemist, who published papers in the British Homeopathic Journal on the influence of planets on plant sap.

He says she wouldn’t be published in Nature, but that this is a problem. He considers the need for scientific validation an “obsession”, and merely thinks that these nutty ideas are hypotheses yet to be proven.

Leaving aside the crazy, unscientific basis of organic farming, do the claimed benefits of organic food hold up to scrutiny?

If you just read the media, you wouldn’t know your arse from your elbow on the question of whether organic food is healthier for you. Let’s consider just one news outlet, the venerable British Broadcasting Corporation.

“Researchers say there is now firm evidence that organically-grown produce is healthier to eat than conventional crops,” it said in early 2000.

“Organic food is no safer or more nutritious than conventionally grown food, according to the chairman of the Food Standards Agency,” it reported later that same year.

“The Advertising Standards Authority has upheld two complaints against the Soil Association for describing organic as ‘healthy’ and ‘more humane to animals’,” it reported in 2005.

“There is no evidence organic food is better for you than conventional food,” it declared in early 2007.

“Eating organic food will not make you healthier, according to researchers at Stanford University, although it could cut your exposure to pesticides,” it reaffirmed in 2012.

“A new scientific review claims organic foods are higher in nutrients and lower in pesticides compared with conventionally grown varieties,” it reported in 2014.

Those last three studies, from 2009, 2012 and 2014 – two finding organic food is not healthier, and one finding it is – remain the benchmark reviews in the field, as far as I could determine.

The first concludes: “There is no evidence of a difference in nutrient quality between organically and conventionally produced foodstuffs.”

The third breaks entirely with the consensus: “Organic crops, on average, have higher concentrations of antioxidants, lower concentrations of [cadmium] and a lower incidence of pesticide residues than the non-organic comparators across regions and production seasons.”

But experts interviewed by the BBC cast a great deal of shade on the study and its results:

Prof Tom Sanders, head of the Diabetes and Nutritional Sciences Division at King’s College London’s School of Medicine, said: “This article is misleading because it refers to antioxidants in plants as if they were a class of essential nutrients, which they are not.

“In terms of macronutrients (protein, carbohydrate, fat), the organic products contained less protein. Other nutrient differences were trivial and well inside the normal range of variation that occurs with different varieties, soil types and variations in weather.

“This study provides no evidence to change my views that there are no meaningful nutritional differences between conventional produced and organic crops.”

Prof Richard Mithen, leader of the Food and Health Programme at the Institute of Food Research, added: “There is no evidence provided that the relatively modest differences in the levels of some of these compounds would have any consequences (good or bad) on public health.

“The references to ‘antioxidants’ and ‘antioxidant activity’, and various ‘antioxidant’ assays would suggest a poor knowledge of the current understanding within the nutrition community of how fruit and vegetables may maintain and improve health.”

Dr Alison Tedstone, chief nutritionist at Public Health England, said: “PHE welcome this addition to the evidence base but we cannot assess the potential impact of organic foods on public health from this study alone.

“Ultimately, we all need to eat more fruit and vegetables regardless of whether they are organic or not to form part of a healthy balanced diet, which will help protect health.”

It would seem that the only paper that found improved nutrition with organics might have wildly overstated its case.

Yet the argument about pesticides warrants closer scrutiny. It seems obvious that conventional farming, which uses industrial pesticides, would produce food with more pesticide residues than organic food, which prohibits most conventional pesticides.