08 Nov 16 OP-ED: Love it or hate it – scientists and journalists need each other

Ask a group of scientists about their past experiences of working with journalists, and you have to brace yourself for a few horror stories….

In my 20 years of working with researchers, I’ve heard it all – how the journalists got it all wrong, distorted the findings, messed up the numbers, overstated the claims and misquoted the experts.

“Science has its own rules and so do the media. Scientists cannot change their methods or findings to suit the media and neither will journalists change the way they report to suit scientists.

“Because journalists write for their readers, listeners and viewers – not for scientists – it is inevitable that they will frame stories in a certain way and highlight things that may seem unimportant to scientists.”

Claims that journalists “sex up” science stories to attract more attention is nothing new, but these days research organisations – and even scientists themselves – have also been found to manipulate studies and hype up their findings to attract media interest.

“Reporters crop down those releases even further, stretching, exaggerating and torturing academic papers until their original meaning of the study has been completely lost,” it says.

A UK study compared 462 press releases with the research papers they were based on, and the 668 resulting news stories.

“Our findings showed that surprisingly little exaggeration happens in the print media“, says Professor Jacky Boivin from the School of Psychology at Cardiff University, who participated in this peer-reviewed study.

“The majority is already present in the preceding press releases issued by the academic institutions, which are generally approved by scientists before release.”

And yet, scientists need journalists just as much as journalists need scientists. Despite a multitude of new media channels, getting your work featured in the mainstream mass media remains a powerful way of reaching new audiences and raising broad awareness of scientific research.

Journalists depend on scientists for stories of new advances in sciences, or for expert comment on scientific issues that affect us all. So, how can we improve the working relationship between scientists and journalists?

“The media will do science better if scientists do the media better,” Mia Malan, health editor at South Africa’s weekly Mail & Guardian newspaper told me. “I find that many scientists want their work featured in my paper, but they hardly ever pick up a newspaper themselves.”

“Working the media begins with understanding how journalists operate, and the pressures and demands they work under,” is the mantra of Australian science communication expert Jenni Metcalfe, who travelled to Africa more than once to join me for media training workshops. 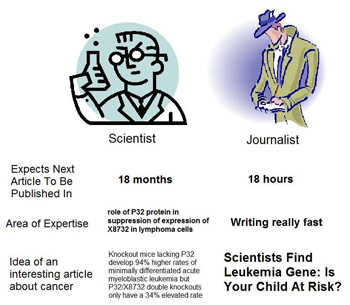 He stressed the importance of a symbiotic relationship, and mutual respect between scientists and journalists. He added that journalists wanted scientists to see them as a valuable part of a process aimed at humanising science and helping to involve lay people in science and technology. Journalists do this through journalistic styles that are easily understood by those people who are not immersed in science.

“See us as part of a process that is putting emphasis on the culture and values of science, technology and innovation as key to building a more rational and peaceful world community.”

Collaboration between scientists and journalists definitely works best when both parties recognise it as a partnership.

Scientists have authority and expertise, and new knowledge to share. Journalists have the skill to turn this into a story that will capture the attention of ordinary people. Jointly, they can make science relevant and interesting to those outside of academia. 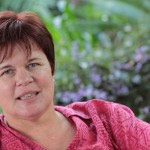 Source: Compassblogs.org; Answering “So What?” in science communication