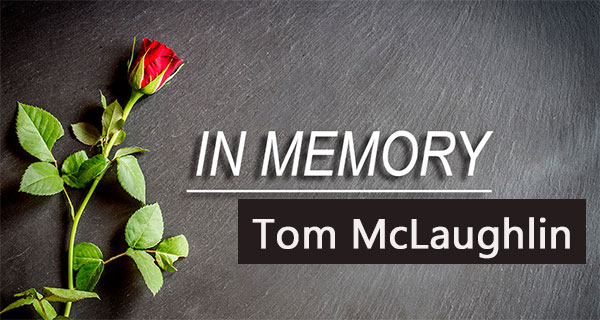 12 Jun 19 Obituary: Tom McLauchlin, a titan of sustainable packaging and business in SA

WHEN Tom McLaughlin died recently on the Isle of Wight (UK) – having moved there from Cape Town just over a year ago – it put a tragic end to his particular brand of packaging professionalism and thought leadership. He left us, however, with an inspirational yardstick for emulation, writes his great friend, Gill Loubser of PPM Magazine.

PARTICULARLY well known for his progressive views on environmental matters affecting packaging, Tom was for many years something of a lone voice as he fervently hammered home his environmental messages at numerous meetings, conferences and industry events throughout South Africa, at the same time shining brightly in his management role as Woolworths’ group packaging manager.

Some three decades ago, when for many of us sustainability and biodegradability were simply words in the dictionary, and the concept of recycling was in its infancy, Tom was already predicting that environmental issues would play a progressively critical role in the future of the packaging industry.

Among his many pronouncements back then was that consumers felt the industry was ignoring its social and moral obligations with regard to conservation of resources and waste minimisation.

He also maintained – quite rightly – that the entire packaging chain would be forced into shared responsibility: sharing the costs of waste disposal with local government and sharing the costs of setting up and maintaining recycling systems for householders, not necessarily because of financial viability but because it was the right thing to do.

The intervening decades have seen many such predictions come true.

More recently, Tom’s avid lobbying and lecturing bore fruit when Woolworths initiated its Good Business Journey, a corporate strategy with sustainability at its core, within which Tom was appointed the retailer’s specialist and spokesman.

Before joining Woolworths, Tom had worked at DRG Sacks and then at DRG Flexibles. The latter plant at Ndabeni, Cape Town, was a hotbed of early flexible packaging R&D that spawned a generation of specialists – of which Tom was a prime example – with intense and abiding technical expertise that subsequently percolated throughout our country’s flexible packaging industry.

With this strong grounding in flexible packaging, Tom was ideally qualified for his role as the industry’s conscience.

His enormous expertise and unwavering passion also meant Tom was ideally placed to be a mentor – happily and generously sharing his knowledge while continuously challenging fellow packaging professionals to rise up and meet the growing spectre of the need for producer responsibility.

Apart from his myriad speaking engagements and numerous appearances on IPSA’s Gold Pack judging panels, another noteworthy example of sharing his knowledge occurred in 1997 when six of us represented IPSA in staging a week-long packaging technology course in Kenya.

Facilitated by a grant from the World Packaging Organisation, we were charged with acting as modern-day missionaries to ‘go forth and take packaging education into Africa’, and Tom was a key participant in fulfilling our brief.

An invaluable resource and an outstanding packaging professional, Tom was held in the highest regard and commanded much affection throughout the packaging industry. I was proud to call him my friend for nearly 40 years.

Our deepest sympathy and sincere condolences go to his wife Barbara and his family at this enormously sorrowful time.