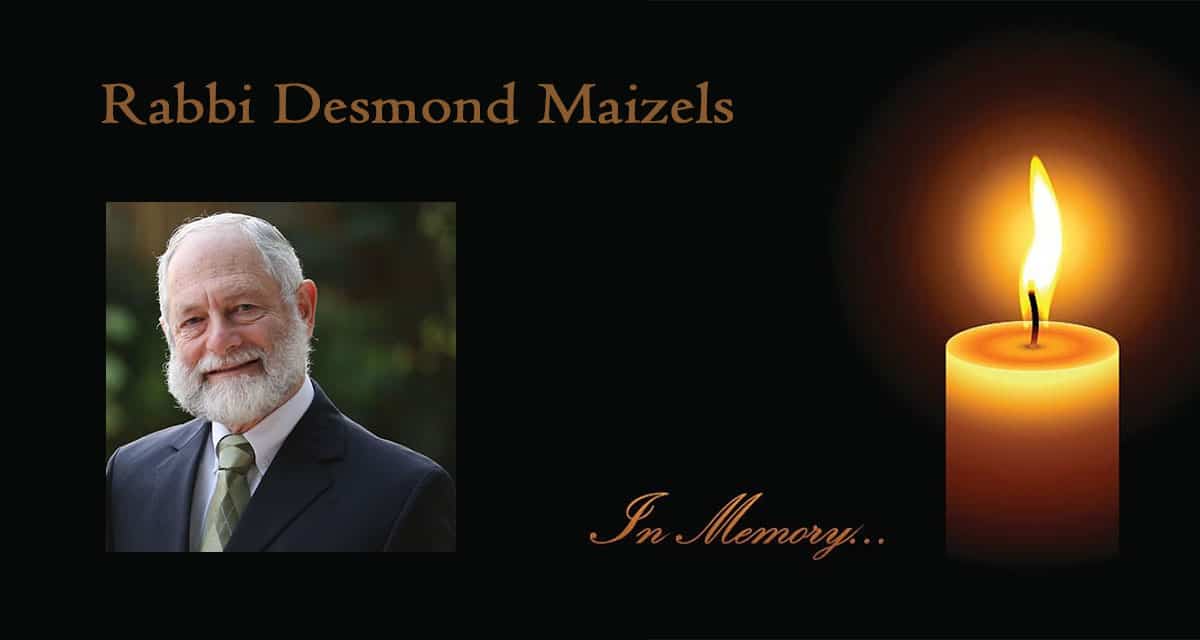 Rabbi Desmond Maizels, head of the Cape Town Beth Din Kashrut, passed away on January 15. A giant and a legend in his community, he was well known and well loved by many in the SA food industry in his role as compliance officer for Kosher standards. His death has particularly moved Saul Abrahams, scion of the duo of families who founded Orley Foods, now part of Kerry Ingredients, who pays his respects here.

The Legendary UCLA basketball head coach, John Wooden, is credited with saying,“The true test of a man’s character is what he does when no one is watching”. I have always thought that the same could be said of any business compliance system, and how much more so, of a quality assurance or food safety system in the food industry.

On hearing the news of his tragic passing, like so many others associated with the Cape Town Jewish community, I was deeply saddened. As the days have passed, I cannot stop thinking about him; about the connection to and deep respect I had for him.

I often hear people talking of “My Rabbi”, typically their Rabbi  is a reference to their spiritual guide, confidant, and mentor. This may not even be the current spiritual leader of their community or place of worship. It is someone who they look to during their life for guidance, not only in the spiritual realm, but also professionally or interpersonally.

I have never thought of myself as having “a Rabbi”, until now that is, when I realised on reflection, that Rabbi Desmond Maizels, was “my Rabbi”. A spiritual leader and role model, whose life intersected with mine many times.

Before my marriage to Jenny, in Jo’burg, it was Rabbi Maizels who vouched for my credentials to the late Rabbi Tanzer (before he would agree to marry Jenny and I), another Tzaddik (righteous and saintly person) who has sadly recently passed.

Rabbi Maizels officiated at the Brit Milah (circumcision) of my eldest son, Jesse. Much to Jesse’s incredulity some 16 years later, on hearing the story that Rabbi Maizels had allowed me to perform the crucial element of the mitzvah (commandment) myself  — obviously having taken meticulous care for the preparation, hygiene and safety himself.

Again, some weeks later, Rabbi Maizels returned to our Fresnaye home , along with Rabbi Popack, to conduct the traditional Pidyon-Ha-Ben (redemption of the first born) ceremony in the company of our family and friends.

These types of significant events always showcased the skill, professionalism, knowledge and spiritual grace of Rabbi Maizels. But it was in the professional sphere, as a young food technologist and would-be international marketer, that I really got to know Rabbi Maizels professionally, and my respect and admiration for him was reinforced.

As a spiritual leader I always saw Rabbi Maizels as accessible, knowledgeable and engaging. These traits were exemplified in the way I observed him “at work”  in the food industry.

In his leadership role at the Cape Town Beth Din Kashrut (kosher) department, he traversed the country — and indeed the world — advising, inspecting and assuring that the conditions and tenets for Kosher certification were met. This certification, in turn, assured Jewish consumers that the packaged or processed food they were consuming was in keeping with the food laws of their faith.

Orley Whip, a long time favourite of Jewish consumers as a non-dairy cream alternative, meant regular visits to our factory by Rabbi Maizels and especially during production leading up to Passover.

Food industry professionals, whether involved in sales, marketing, planning, logistics, procurement, engineering, technology and, above all, on the production and packaging floor, are well aware of the commercial, quality and asafety aspects of the various manufacturing best practices, systems and global standards, such as GMP / HACCP.

The consequences of a breakdown or mishap in such systems are most often easily grasped, there are economic, reputational and worst-case life threatening consequences, as is seen every year around the world with cases of food poisoning and spoilage.

In the case of a compliance requirement, based on a religious or ethical precept, such as vegetarian, vegan, Haalal or Kosher, as a standard that requires consideration and maintenance, the consequence of a system breakdown or compliance itself —  to the outsider —  may certainly not seem life threatening. This is a regulatory observance in a factory to meet the requirements of a faith or belief, not always easily understood, and easily not prioritized, as one might in the case of food-safety requirements.

Most certainly, this was one of the many realms at which Rabbi Maizels excelled. His visits to factories were welcomed by those on the factory floor.  His gift to form human connection and to communicate in a clear and non-threatening manner with those that ultimately were responsible for assuring that the requirements were met and, most importantly, maintained while no-one was watching.

His fluency in Afrikaans and isiXhosa, his sensitivity and humour, underpinned his ethos of humble human connection. The thousands of people he will have interacted with in local and foreign food factories would have built profound interfaith bridges of understanding and mutual respect. These bridges were built, like so much else that Rabbi Maizels did — quietly, modestly and consistently.

As I transitioned in my food industry career towards sales and marketing, and with a keen eye on international markets, I had the good fortune to meet up with Rabbi Maizels at the KosherFest expo in Paris. In the space of 12 hours I received a master-class in relationship building, networking and humility.

Rabbi Maizels’ Rolodex was exceptional; he could not walk five paces without recognition from one of the many world-wide kosher authorities and manufacturers at the event. Not only was he forging and maintaining relationships, but he was also keeping abreast of new industry ingredients and developments. He had a deep understanding of the intersection between chemistry, food science and the boundaries and  intricacies of the kosher laws.

That evening, we ended up at the airport at the same time, heading to different destinations, and as it so happened, both on Lufthansa flights. Rabbi Maizels invited me into the business class lounge as his guest. He was not flying business class, on the contrary, he refused the offers of those companies that contracted his services and those of the Beth Din, to fly him business class. He  had attained his frequent flyer status by sheer mileage flown across the country and the world, in service of the community and his people.

For him, the rituals he performed, the factories he inspected and the hardships and sacrifices he and his family endured during his long trips on the road were acts of service. He was often, controversially, at odds with the administrators of the organizations he served. As he explained to me once, he firmly believed that his “kosher services and inspections” should not be charged for, and certainly not profited from; that these were services to the community.

My heart goes out to Rebbetzin Esther Maizels —  an exemplary community leader and educator in her own right — and their children and family. Rabbi Maizels, personified and role-modelled the ‘Servant Leadership’ our world so desperately needs today.

Rabbi Desmond Maizels, may your kind soul rest in peace. With affection, love and respect,