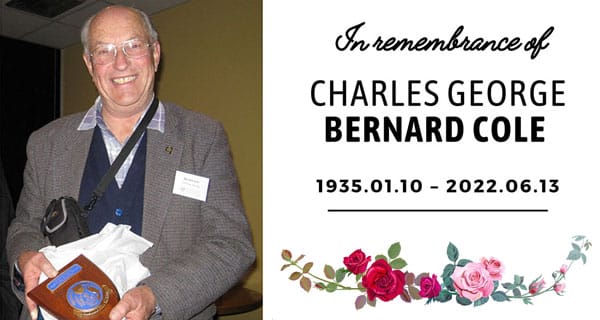 FOODStuff SA is sad to report the passing of Bernard Cole, a respected food scientist and long-time SAAFoST servant and supporter.

FOODStuff SA is sad to report the passing of Bernard Cole, a respected food scientist and long-time SAAFoST servant and supporter.

Bernard, Honorary Life Member of SAAFoST since 2007, passed away in Australia after a long battle with cancer.

His association with SAAFoST started in 1979 as an Institution Member Representative for Davis Gelatine Industries in Krugersdorp and developed after being elected to the Northern Branch Committee in 1985 and becoming a member in his own right in 1989.

He served on that committee for twenty years as branch secretary, vice chairman and, ultimately, chairman. In 1995 Bernard was elected to the SAAFoST Council where he served until 2005.

In 1996, in association with the South African Council for Natural Scientific Professions (SACNASP), he set up the 1997 SAAFoST Congress website which, after the event, was transformed into the first one for the Association with himself as webmaster.

He also set up, managed and maintained the Food Advisory Consumer Service (FACS) website shortly after the Service became administered by SAAFoST in 2004.

Ever the keen, industry-based academic, Bernard thrived on the FACS committee as secretary, treasurer and webmaster and undertook the arduous and thankless task of updating website articles on controversial food and nutrition topics.

He was always a supporter of SAAFoST’s education portfolios and activities and became the Food and Beverages Manufacturing Sector Education and Training Authority (FoodBevSETA) contact, in addition to participating in its occupation-based training and skills programme.

In 1992, while studying part-time at the University of Pretoria for his PhD, he was awarded the SAAFoST’s highest academic award, the Koeppen Memorial Scholarship.

He was well-known for his compilation of the SAAFoST Snippets newsletter of food and related extracts from scientific literature. By the time he retired as editor in about 2019, Bernard had kept Snippets going for close to twenty-five years.

Bernard delved into the Association’s archives and compiled a beautifully-bound copy of, “SAAFoST – The First Fifty Years”, which he presented to the SAAFoST President on the occasion of the Association’s Fiftieth Anniversary Banquet – celebrated in association with the International Union of Food Science and Technology’s (IUFoST) 15th World Congress of Food Science and Technology held in Cape Town in 2010. This work has subsequently been transferred to the SAAFoST website.

In 2016 he moved with Ann, his wife, to join their family in Australia. Ever the well-spoken man of faith and selfless devotee to the Association and its promotion and advancement of food and related sciences, he was never afraid to politely speak his mind and offer his opinion on a wide range of subjects entirely without irritation or malice – an extraordinary and endearing characteristic for which this fine gentleman will be sorely missed by an entire generation of SAAFoST Members, colleagues and friends.

This tribute is penned by Owen Frisby, former executive director of SAAFoST.