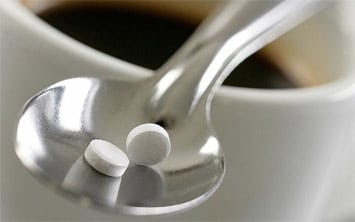 Do artificial sweeteners make you gain weight? This question has been hotly debated by scientists for decades with study after study showing strange correlations between a tendency to obesity and consumption of low-calorie sweeteners.

A new study could have uncovered one of the biological mechanisms behind this counter-intuitive phenomenon.

Ever since the introduction of modern artificial sweeteners to our shelves in the 1980s there has been debate around their safety and ultimate efficacy as a weight-loss agent.

Several large scale studies over the past 30 years have displayed positive correlations between weight gain and artificial sweetener use.

While these studies did not imply a direct cause and effect, many researchers tried to come up with ways to explain the seemingly anomalous results. After all, why would consumption of lower-calorie foodstuffs result in weight gain?

Other explanations speculated that artificial sweeteners confused the body’s regular metabolic processes by being sweet but lacking calories.

When your body doesn’t get the caloric follow up from foods that taste sweet it could interfere with the normal hunger signals. This potentially resulted in low-calorie sweeteners making you more hungry than you would be otherwise.

All these explanations still relied on the individual ultimately not moderating their overall food intake, be it through miscalculation of caloric intake or uncontrollable hunger signals.

But a new study from a team at George Washington University may be finally homing in on a biological reason that could explain why artificial sweeteners tend to correlate with weight gain.

The research concentrated on the artificial sweetener sucralose, and tested its effects directly on stem cells taken from human fat tissue.

When the cells were exposed to a concentration of sucralose equivalent to that of someone drinking four cans of diet soda a day, an increased accumulation of fat droplets in the cells was observed, as was a higher expression of genes that are seen to be markers of inflammation and fat production.

The team also noted a 2.5-fold higher expression of sweet-taste receptors in the fat tissue of the subjects that consumed the sweeteners.

The suspicion is that the higher expression of these sweet-taste receptors in the fat cells plays a role in allowing the increased glucose transport into the cells.

The research concludes by claiming that this metabolic dysregulation causes cellular mechanisms to produce more fat, and distressingly they saw the effects more apparent in obese subjects than those of normal weight.

“Many health-conscious individuals like to consume low-calorie sweeteners as an alternative to sugar,” says the study’s principle investigator, Associate Professor Sabyasachi Sen. “However, there is increasing scientific evidence that these sweeteners promote metabolic dysfunction.”

The research is still in its early stages and still needs to be confirmed on a broader scale, but it could bring us closer to understanding why many studies show artificial sweeteners don’t contribute to weight loss.

Refuting response from the ISA

The International Sweeteners Association has responded to the study saying, “The conclusions drawn by the investigators are wholly inconsistent with the far more robust studies, and points to both over-reaching, inflammatory conclusions and a want of good scientific rigour.

“Moreover, the types of studies presented at ENDO 2017 are not the kinds of studies that can be considered appropriate for actual assessment of effects on human body weight or adiposity.

“The reported results are overturned by extensive in vivo research studies that show that low calorie sweeteners, including sucralose, do not increase either body weight or adiposity.

“Importantly, a large number of randomized clinical trials and well-designed systematic reviews have repetitively shown that, when used in place of sugar, low calorie sweeteners can help in energy reduction and weight loss.

“It is widely recognised by the scientific community that it is critical to both avoid premature conclusions that might result from a single research study, especially when few details are available, and to look at the entire body of evidence.

“The collective body of evidence, based on a wealth of well-designed research, supports that all approved low calorie sweeteners can help safely lower sugar intake. They can be a useful tool in nutritional strategies for maintaining or lowering body weight and fatness.”

This study comes just days after additional new research showed that sucralose doesn’t increase appetite, refuting previous studies which suggested that it does.