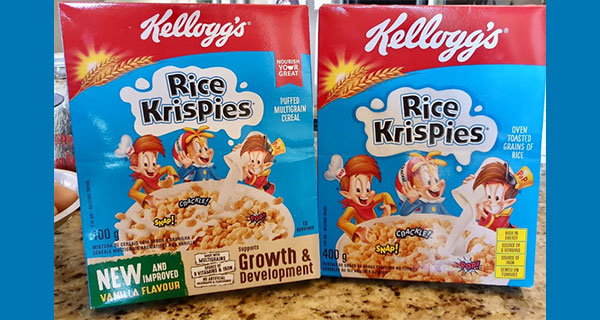 What has prompted Kellogg’s South Africa to radically change the recipe of its iconic Rice Krispies? Doing so has generated scathing criticisism from hundreds of South Africans, reports leading consumer journalist, Wendy Knowler.

The product has gone from rice to “multigrain”‚ a “vanilla” flavour has been added along with twice the sugar‚ and to top it all‚ the famous snap‚ crackle and pop has disappeared, she excoriates.

Many of the more than 500 consumers who have shared their outrage on the company’s Facebook page have accused it of “tricking” them into buying the “new‚ improved” Rice Krispies (pictured left) by not making it clear that the product is entirely different.

“I bought two boxes and my son HAAAAATES them!” said Gugulethu Zungu.

“And it’s shady how you guys just put them there like they are the originals cos the vanilla flavour wording is so small and unnoticeable. Please stop production and return the original Rice Krispies.”

Rukshana Dollie-Ismail said: “Omw… cant believe the nation feels the same. I lodged a complaint with Kellogg’s two weeks ago and nothing has been done. My kids really don’t like it and Kellogg’s has taken away the originality and memories too…”

Mohammed Sader asked: “What were you thinking? Epic fail. You are just destroying a strong household brand. My four-year-old nephew refuses to have the new product…”

In an email to TimesLIVE‚ Sandy Roman of Cape Town called the new Rice Krispies “the most revolting cereal I have ever tasted… And on Facebook all Kellogg’s does is give the standard response to all the complaints: ‘Thanks for getting in touch. We appreciate your valuable feedback!’ I am hopping mad because I spent more than R60 on this revolting product.”

The test group included “both existing Rice Krispies consumers and those who had lapsed or had never consumed it – all of them mothers and their children”‚ she said.

“While we understand there are differences in everyone’s taste‚ the results from this market research indicated that the Rice Krispies Vanilla concept and food was significantly liked by all consumers‚” Mbatha said.

The move from a single grain (rice) formula to multi-grains allowed Kellogg’s to source all their major ingredients locally‚ she said‚ “whereas previously we imported all main ingredients”.

Rice Krispies Vanilla did have “a thin coating of sugar” to enhance crispiness‚ Mbatha said‚ equivalent to 1.5 teaspoons per serving.

Kellogg’s restricts the sugar content of its products to no more than 33% (33g per 100g) of sugar‚ and the new Rice Krispies Vanilla was developed within these guidelines at 21.7g per 100g‚ she said.

“But we acknowledge that there is more room for improvement by way of both consumer education as well as our ongoing commitments to make our products better and to meet consumers’ needs.”

As for claims that the new pack is easily mistaken for the familiar decades-old one‚ Mbatha said the company had “made every effort to clearly state the new and improved vanilla formula on Rice Krispies Vanilla package”.

“In order to improve consumer awareness of this new Rice Krispies Vanilla‚ we are conducting sampling in stores and we will be expanding the sample base over the coming months‚” she said.

“I was really disappointed when I opened up my new box of Coco Pops‚” said Sharlene Naicker. “Not only does it look different‚ but the taste and feel is nothing like the Coco Pops I grew up enjoying – it has an artificial taste and texture.”