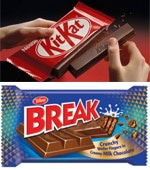 Although the Break doesn’t have a similar cover to the KitKat and the Gauteng High Court (Pretoria) earlier ruled that the two are not easily confused, the SCA saw a strong enough resemblance in the shape of the chocolates.

Judge K Swain said the form or shape of a product falls within the definition of a registered trademark in terms of the Trademarks Act. Iffco is therefore not entitled to use the same two-finger and four-finger shape as KitKat. Swain agreed, however, that Nestlé had not proved consumers would be confused between the two products. Nestlé has mixed success in its trademark infringement challenges around the world, say reports.

In the same week it won the battle in South Africa, Nestlé got a heavy blow in the courts of Singapore where the High Court not only dismissed the trademark claim against a competitor, Petra Foods, but upheld a counter application to lift Nestlé’s exclusive right to produce chocolates with that specific shape. In the UK, authorities refused last year to register the shape of the KitKat as a unique trademark.