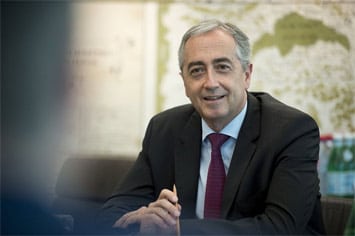 Food giant Nestlé, famed for KitKats, says it has found a way to reduce the amount of sugar in chocolate by as much as 40 percent, a discovery that may give  it an edge as food producers face increasing pressure from governments, health advocates and consumers to make products healthier.

It has reportedly developed process to alter the structure of sugar that makes it taste sweeter in smaller amounts, according to its Chief Technology Officer, Dr Stefan Catsicas (above).

“We want people to get used to a different taste, a taste that would be more natural,” Catsicas said. “We really want to be the drivers of the solution.”

Catsicas did not expand on what the process involves but likened it to making sugar crystals that are hollow.

He added: “The crystals dissolve more quickly, stimulating the taste buds faster. Unprocessed food has complex structures, which Nestlé is trying to mimic by distributing the sugar in a less uniform way. If you look with an electron microscope into an apple, that’s exactly what you see.

“Real food in nature is not something smooth and homogeneous. It’s full of cavities, crests and densities. So by reproducing this variability, we are able to restore the same sensation.”

He compared the strategy to his own experience using less sugar in his coffee, making a small reduction each week. After three months, he took his coffee unsweetened.

Nestlé is presently seeking to patent the sugar-reduction process. He said Nestlé is due to start selling its confectionery products using the new process in 2018 and will gradually reduce its sugar content. More details about it would be released next year.

Catsicas said Nestlé would have preferred to make the announcement after receiving patents and trademark protection. But he said the news was already leaking, and the company wanted to tell its own story rather than allowing someone else to do so.

Nestlé isn’t alone in research on altering the consistency of sugar. Leatherhead Food Research, a UK institute whose 100 scientists consult for food companies, has been studying how to shrink the size of crystals or coat sugar around low-calorie ingredients. The approach has also been tried on salt.

“If it works for salt, I assume it could work for sugar,” said Joanne Slavin, a professor of food science and nutrition at the University of Minnesota. “Price is another complicating factor: if this new sugar is much more expensive than sugar, it will increase cost.”

An additional challenge is that less sugar can change the feel of a product in the mouth.

Nestlé declined to say whether it will use the technology in other product categories, as it’s waiting for the patent to be published. The potential 40 percent reduction isn’t a formal target, and Nestlé has yet to announce its 2017 goals for cutting sugar use.

The company has used a similar approach in ice cream, where it makes Dreyer’s with a “slow-churned” method that reduces fat by half and calories by a third. It’s trying to apply the restructuring method to salt, Catsicas said, and may consider licensing the technology to other companies.

“I would have no problem with that,” he said. “If we can make a good business case, if we can get the returns that we deserve, then why not?”

But he added that “it is not something that can be mixed into your coffee.” It also cannot be used to sweeten soda.

This news comes as the WHO has recommended increasing the price of sugary drinks by 20 per cent to reduce consumption by a fifth, and many countries are implementing or considering sugar taxes to help combat the obesity and diabetes pandemics.