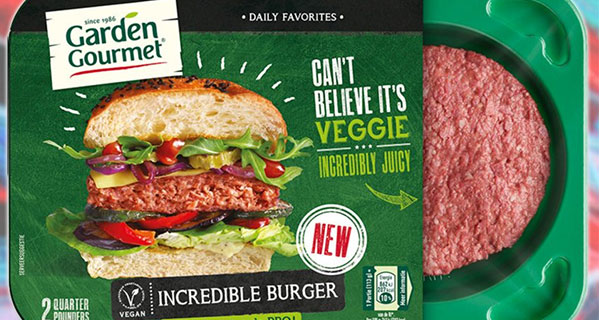 The race to meet rising demand for vegetarian meals is heating up as Nestlé unveiled plans to introduce its soy-protein-based burgers across Europe and the US this year.

Nestlé meatless Incredible Burger will go on sale in supermarkets in Europe under the Garden Gourmet brand this month, starting out in countries including Germany, the Netherlands and Sweden. Near the end of the year, a version designed for American palates called the Awesome Burger will be available where Sweet Earth brand products are sold, the world’s largest food company said.

Nestlé has today announced its biggest move yet into the meat-free market, launching a new ‘cook from raw’ plant-based burger in Europe, and unveiling plans for the United States.

“They underline Nestlé’s increased focus on tasty, authentic plant-based food. We believe this trend is here to stay, as consumers look at different ways to enjoy and balance their protein intake and lower the environmental footprint of their diets.”

As consumers reduce their meat intake, food companies are rushing in with alternatives. Nestlé’s announcement comes the day after Restaurant Brands International’s Burger King said it will start a test run of meatless burgers using patties from Impossible Foods in the St Louis area.

“It’s a big trend,” said Alain Oberhuber, an analyst at MainFirst in Zurich who has tasted Nestlé’s meat substitute product. “I liked it a lot. Even without sauce, you didn’t really taste a big difference.”

Meatless also sells well to millennials, because it creates fewer greenhouse emissions than raising beef, Oberhuber said. The product may also have a higher gross margin, and because it’s hard to replicate meat, the new market segment is hard for new entrants to conquer.

Nestlé’s product includes wheat and soy protein, as well as extracts of beetroot, carrot and bell peppers to help make it look like meat. The company is launching it in the chilled and frozen aisles of supermarkets across Europe, while Burger King’s test run is currently confined to 59 fast-food restaurants near St Louis.

The field is growing, with new entrants like Beyond Meat, backed by Bill Gates, competing with The Vegetarian Butcher, recently acquired by Unilever. Beyond Meat already is widely available in retail in the US, and an 8 ounce burger at Amazon’s Whole Foods can cost $5.99. Beyond Meat also sells meatless substitutes for sausages and chicken strips.

Nestlé doesn’t have a product at restaurants yet, and the Swiss company is racing to reach store shelves in the US.

Impossible Foods has a similar goal, but first needs approval from the FDA for the key ingredient in its patties. Nestlé’s patties don’t use the substance, a molecule called heme.

Impossible Food meat substitutes are available in more than 5 000 restaurants in the US, including White Castle, which serves meatless sliders for $1.99.

Impossible Foods has told US regulators it aims to raise more capital. Temasek, one of its shareholders, is considering investing $75-million in the new funding round, the Financial Times said, citing people familiar with the matter.

Nestlé’s plant-based business may reach more than 1 billion francs ($1-billion) in sales within a decade, Laurent Freixe, CEO of the Americas region, has forecast. Austria, Belgium, Denmark, Finland and Norway are the other countries where the patties will be available this month, and the Swiss company plans to expand them to other countries later.

In February, Nestlé put its Herta lunch-meat business up for sale as CEO, Mark Schneider, tries to spur sales growth.