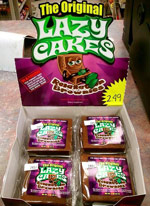 19 May 11 Melatonin desserts – laid back and legal

Remember melatonin? In the 1990s, this over-the-counter dietary supplement was all the rage among frequent fliers, promoted as the miracle cure for jet lag. Now in the US it is back in vogue, this time as a prominent ingredient in at least a half-dozen baked goods that flagrantly mimic the soothing effects of hash brownies — and do so legally. At least for now.

Each snack has about 8 milligrams of melatonin.

With names like Lazy Cakes, Kush Cakes and Lulla Pies, these products are sold online and at stores like 7-Eleven, Walgreens, smoke shops and even at the Harvard Square Coop, the university’s student bookstore, for roughly $3 to $4 each. (A bottle of 60 8-milligram melatonin tablets costs about $11.) At some places, the drug-packed desserts can be paid for with food stamps.

Although the Food and Drug Administration has not approved melatonin as a food additive or deemed it safe, the dessert makers are marketing their products as a harmless way to promote relaxation. And the snacks are increasingly being endorsed by fans on Facebook and Twitter as an antidote to stress and sleep deprivation. (Who needs yoga?) On the Facebook page for Lazy Cakes, one woman who said she has bipolar disorder wrote that the treat “helps a lot with my sleeping and panic attacks I can lay off my Xanax a little.”

Gabby Bevel, 22, a writer from Norman, Okla, and an insomniac who took Ambien and Lunesta in high school, said in an interview that she slept 13 hours after eating one Lazy Cakes snack recently. “I don’t like the idea of needing something unnatural to help me with anything,” she said. “Really, I think part of the appeal is it does come in a brownie.”

But these snacks contain roughly 8 milligrams of melatonin per brownie or cookie, so selling them is similar to a parent serving an unsuspecting child applesauce containing a crushed aspirin tablet to make it go down easier. “It’s making it much more difficult for the consumer to recognize that they are taking a drug,” said Dr Charles A Czeisler, the chief of the division of sleep medicine at Harvard’s Brigham and Women’s Hospital.

Nick Collado, a 26-year-old insomniac and the founder of Lulla Pies, argued that the melatonin they contain, while synthetic, is more “natural” than the Ambien he used to take. “I realized there’s got to be more people like me who don’t want to take prescription drugs anymore, who want to take an alternative,” Mr Collado said.

But Dr David S Seres, the director of medical nutrition at Columbia Medical Center, cautioned that consumers should consult their doctors before trying such products.

“The promoters of these are appealing to people who think it’s better to do things outside of the medical establishment,” he said, adding that “the desire to help people is an extremely strong motivator, but so is money.” He pointed to a section of the National Institutes of Health’s Web site that lists several drugs, including sedatives like clonazepam and birth control pills, whose efficacy might be altered by melatonin…..