24 Jan 17 McDonald’s SA has been forced to make a U-turn on battery eggs. Here’s how 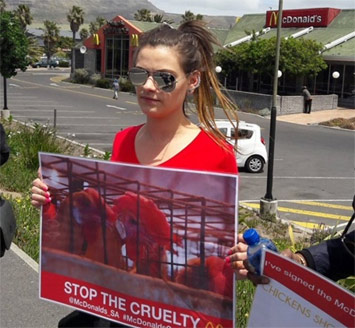 South Africans have been known to be an activist bunch – in recent times there have been a number of high profile campaigns, often with varying degrees of success. These include the #feesmustfall protests against high tuition fees on the country’s campuses, protests against toll roads and ongoing service delivery demonstrations.

But protesters – even successful ones – could learn a thing or two from a small, under-reported, but highly effective campaign against a powerful multinational fastfood chain.

Yolanda Güse, a Master’s student at the Cape Peninsula University of Technology (pictured above), lobbied support against the burger and fast food chain McDonald’s South Africa. And won.

It started with animal protection group Beauty without Cruelty South Africa. They informed their members through their monthly newsletters about McDonald’s cruelty in using battery caged chickens to produce the eggs used in their Breakfast McMuffin meals.

A battery cage is a wire box, the size of an A4 piece of paper. A chicken spends her entire life in this cage producing eggs. The animals suffer from stress as well as physical harm, including bone weakness and breakage, feather loss and diseases.

Beauty without Cruelty South Africa expressed its concern that while McDonald’s in both the US and Canada agreed to phase out the practice, McDonald’s South Africa hadn’t followed suit.

In a statement the local affiliate responded: We take note of the moves made by our USA and Canadian counterparts, and though we are exploring the viability of expanding McDonald’s cage-free policy to South Africa, we cannot at this stage make a similar commitment as the one made by McDonald’s USA and McDonald’s Canada.

As a member of Beauty without Cruelty SA, Güse took up the plight against McDonald’s. In her petition motivation she highlighted a statement from the South Africa CEO, Greg Solomon, and the corporate affairs director, Sechaba Motsielo, which stated: We absolutely do not condone the cruel treatment of animals by our suppliers.

Yet they continued to use battery eggs.

Güse told me in an interview that her love for chickens and having them as pets heightened her desire to pursue this cause.

With the support of Beauty without Cruelty SA, Güse attracted the backing of other animal protection organisations. These included the United Front 4 Animals, Animal Voice (the official South African representative of Compassion in World Farming) and South African Faith Communities’ Environment Institute, as well as individuals.

Greater Than, a Cape Town based public relations agency, took on the campaign pro bono and a number of South African celebrities publicised their support in the media. More than 18 000 people signed the campaign’s petition.

Güse was interviewed on various media platforms, including television and radio talk shows. She also actively shared her views on social media. It got the public interested.

Her passion and perseverance finally paid off

On 14 November 2016 Güse and her team received news that McDonald’s SA had agreed to stop the harvesting of caged eggs and committed itself, over time, to using 100% caged free eggs.

It will start phasing in caged-free eggs at all its restaurants this year and has undertaken to complete the process by 2025. This is because the policy will mean a complete restructuring of the current egg-farming industry.

This is more than just a victory for Güse. Not only are cage free eggs a healthier option but jobs will be created. Farmers will now need to adapt their cages and farms to the new requirements of cage free eggs.

In a Fortune article after McDonald’s US decision to go cage free, American poultry farmer Greg Herbruck said transitioning to cage free egg production meant a lot more staff would be required to ensure that birds were socially placed as hens tend to bully each other.

There’s also a pecking order of domination which has an impact on the production of eggs. This means that hens require daily checks and need to be trained to lay their eggs in allocated slots.

All of this suggests that the current status quo in egg farming will change. Farmers will be expected to train staff to ensure a successful transition, leading to new skills and job creation.

Why was the campaign so successful? Some key factors guaranteed its success. With refining and adapting, they can work for various activist activities: