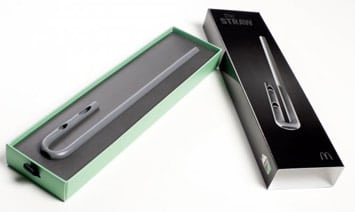 The internet’s abuzz with McDonald’s [in the US] latest announcement. It’s not all-day breakfast (that’s already a thing). And no, they’re not making the McRib a menu staple. It’s tech-y. It’s design-y. It’s a new … straw?

McDonald’s has dubbed this innovation the Suction Tube for Reverse Axial Withdrawal (aka STRAW).

That’s right, the world’s largest fast food company is now investing in straw technology. McDonald’s even hired a whip-smart team of engineers and designers to re-invent and re-engineer the sucking apparatus.

They’re clearly having a bit of fun with it. For starters, McDonald’s unabashedly mimicked Apple in how they broadcast the announcement.

They tapped YouTube tech star, Austin Evans, to announce the straw on Facebook Live. Evans presented the straw in sleek packaging, not unlike the box your iPhone arrives in.

He then led the design and engineering team in a tongue-in-cheek Q&A session, inviting Facebook users to comment and participate for a chance to win one.

Why McDonald’s thought the straw was ripe for innovation 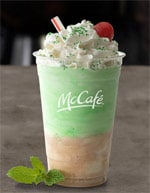 But this year, McDonald’s shook things up by adding a two-toned number to their Shamrock Shake repertoire – chocolate on the bottom, mint on the top.

With standard straw technology, it’s impossible to sip both flavours at once. So McDonald’s brought in the best-of-the-best product designers and aerospace engineers.

The managing partners of NK Labs and Jace Design – the same engineers and designers who worked on Google’s Project Ara together – came together to solve this perplexing problem.

Could they design a new straw that would allow simultaneously sipping of the bottom chocolate shake layer and the top Shamrock Shake layer?

“It’s one of those things that seems so simple, but as we got into it there were a lot more issues exposed,” NK Labs managing partner Seth Newburg told Fast Company. “It turned out to present quite a few engineering and scientific challenges.”

One major challenge? Shakes slowly and inevitably melt. So the straw had to account for a change in viscosity. What’s more, the design had to work well whether the shake was full, half-consumed, or nearly finished. At all stages of shake consumption, as-close-to-equal doses of both flavours had to enter the sipper’s mouth.

The team had solved complex engineering problems before. They had designed aviation components, robotic submarines, and smartphones. But sometimes the simplest of problems are the most complicated to solve.

So they went back to the drawing board to design a straw that would solve the two-layered problem.

Whiteboarding, brainstorming, prototyping, and a heck of a lot of Shamrock Shake taste testing led to the final design: a J-shape straw with strategically placed holes on the bottom and sides. CAD models and 3D printing were employed to get the design just right.

Engadget describes the new McDonald’s straw as “a snorkel for your Shamrock Shake”. Fast Company’s Mark Wilson got his hands on one and described its shape as “a saxophone, or a fish hook, with fluted holes.”

However you explain it, it’s certainly bringing something new to the world of straws.

And does it work? Only a select few will get to give the straw the suck test. McDonald’s is distributing them with Shamrock Shakes in 80 cities to start. If people like what they sip, McDonald’s may roll out the straw to more markets.