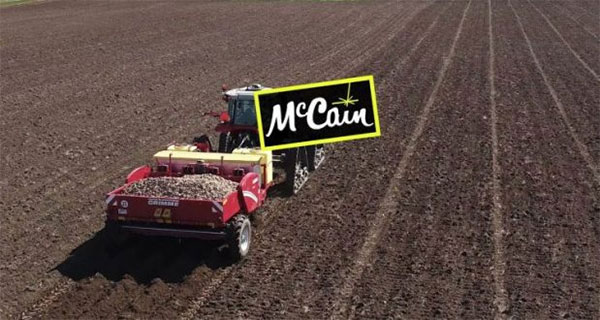 McCain Foods, the world’s largest producer of frozen potato products, will be developing its second ‘Farms of the Future’ project, a farm focused on sustainable regenerative farming practices, near Litchenburg in the North West province.

Mark Du Plessis, director of agriculture at McCain South Africa, says the project will kick off on July 1, with the first potato crop expected to be planted in August.

This follows the launch of the company’s pilot farm project in McCain’s hometown Florenceville in Canada in 2020.

The group says the farm will include a total of 465 hectares (ha) under irrigation and 90ha dryland, on which it will grow 125ha of potatoes per year.

“It will focus on enhancing productivity, while prioritising soil health, water efficiency, the reduction of agro-chemical impacts and the introduction and preservation of biodiversity.”

Du Plessis says the regenerative agricultural farm, which will operate as an ecosystem, will primarily cultivate potatoes on a four-year sequence involving the rotation of potatoes, radish, winter crop mixes, maize, soybeans and wheat.

This, according to Du Plessis, will rid the soil of transmittable diseases and will encourage farmers to avoid using chemicals that are harmful to the environment.

The group says the location in South Africa is the second out of three farm projects that McCain intends to open across different regions around the world by 2025 and is part of its plan to implement regenerative agricultural practices across all of its potato acreage by 2030.

“We’ve got a good base of knowledge and experience in terms of the feasibility, and that makes this project a good start for us in South Africa,” adds Du Plessis.

The company says its pilot farm project in Canada had a successful first year in terms of results and for setting guidelines for future progress.

McCain says it reduced agro-chemical impacts by nearly 17% compared to a typical grower’s farm in the area, further reducing greenhouse gas emissions from fertiliser applications by approximately 2% while maintaining its yield.

“We know that investing in the soil to build grower resilience is the solution. McCain’s regenerative agriculture commitments are the mechanism through which we drive not only resilience in our grower base, but also reducing carbon emissions,” said Jess Newman, senior director of agriculture & sustainability at McCain.

“Climate change is an existential threat to the potato industry. We know that our growers and all regions are facing increased variability in crop failures. When we think about South Africa, we’re looking at water scarcity, increased incidence of pests and disease.

“We know that investments in soil health can sometimes take ten to twelve years to really pay off to see that increase in organic soil matter. But that compaction difference in even one year was just so amazing to see. It’s been a great and successful first year in New Brunswick. We look forward to those wins, specifically in South Africa,” she added.

McCain CEO Max Koeune said the Farms of the Future project is vital in trying to make the global food system more sustainable.

“This is a critical moment. The strain that global supply chains are under right now is shining a stark light on how exposed we are, with a food system that requires a radical transformation to address the challenges of our century,” he said.

“If we don’t change the way we farm, feeding the world in 30 years will require an 87% increase in carbon emissions. The implications of that are bleak – and we cannot allow it to happen.

“Farmers are on the front line here – they see the impacts every day, with extreme weather wreaking havoc on the growing season. Working collaboratively, we believe this transformation will ensure both McCain and our farmers will have a business for generations to come.”