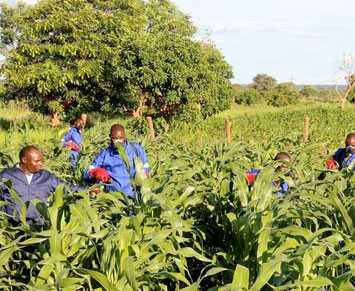 Outbreaks were first reported in West and Central Africa at the beginning of last year. They have since jumped the Equator into Burundi, Zambia, Zimbabwe and Malawi and have spread to some of the northern areas of South Africa.

Crop Life SA says the country should be worried about an invasion, mainly in Limpopo, the Free State, and Western Cape sandveld – even though this particular species of armyworm is not yet confirmed by genetic analysis.

“Farms in Levubu, Pontdrif and Mookgophong in Limpopo are confirmed to have been hit by the fall armyworm invasion. This is a crisis for all South African maize growers. We were caught unawares by this pest but have a very strong presence of extension services. If left uncontrolled it can have a devastating effect on the maize crop and cripple the harvest,” he said.

“In other African countries they rely heavily on South Africa’s support with info and advice.”

The fall armyworm also has a very large host range and although it has only been observed on maize in South Africa, it could travel on propagation material or other plant products of other hosts from one country to another.

Verdoorn said the armyworm moved with passage winds and weather fronts and migrated through host plants. They can move thousands of kilometres a week, are resistant to pyrethroid insecticides, and to a lesser extent to organophosphates and carbamates.

The Department of Agriculture, Forestry and Fisheries confirmed the reports on the armyworms.

“We did receive reports of pest damage, which raises concern. However, the damage over the broader area has not been assessed yet,” department spokesman Bomikazi Molapo said.

“The biggest danger is incorrect information on farm management of the pest, which can lead to pesticide resistance and production losses. Production losses will ultimately lead to food security issues. Small-scale and other resource farmers are especially at risk.”

Large appetite – Armyworm caterpillars are devastating maize plants in Zimbabwe, Zambia and Malawi, where it is a staple food crop. … The fall armyworm moth is among the most notorious pests in the Americas and it has recently invaded southern Africa.