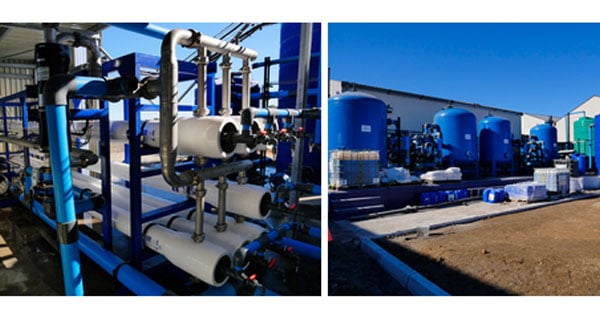 The extreme drought in the Western Cape is forcing creative investment in water alternatives, with latest news that the Oceana Group, SA’s biggest fishing group, has commissioned two desalination plants at its West Coast cannery and fishmeal operations.

Officially launched earlier this month, the plants that were designed, installed and commissioned by JSE-listed AECI water and process subsidiary, ImproChem, at undisclosed cost.

The desalination plants at Lucky Star’s fishmeal operations at St Helena Bay and Laaiplek have produced more than 50-million litres of water since their start-up at the end of April, says ImproChem executive director, Sepadi Mohlabeng.

The 26 m3/h Laaiplek desalination plant, or Amawandle Pelagic, has seven RO vessels and 49 RO membranes. The plant has the capacity to produce 624 000 ℓ/d of water.

Energy recovery devices are deployed in the design to use the high brine solution pressure to drive the desalination skid booster pump.

The commissioning of the Lucky Star plants, which were completed in less than 60 days, has relieved the canned fish producer’s water-intensive operations of their dependence on the West Coast district municipality’s water supply.

Water restrictions, implemented this year, are still in place in the Western Cape and will remain in place until dam levels reach more than 85% as a collective average. Dam levels were at 53.05% as of July 9.

The quality of the water produced by the Lucky Star plants will conform to the South African National Standard (SANS 241-1:2015) as a minimum requirement for potable water. Quality will be monitored continuously by the online plant instrumentation, as well as ImproChem’s quality management system.