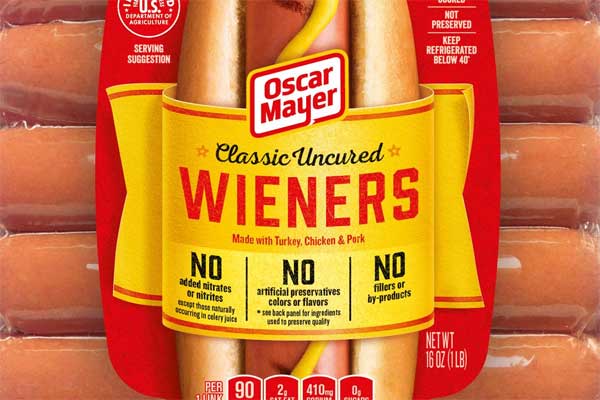 Consumers want clean labels, but ensuring food safety and shelf life without synthetics is a challenge.

“Oscar Mayer is America’s most iconic hot dog brand, and, as the equity leader, we felt it was time to take a stand for the love of a better hot dog,” said Greg Guidotti, the brand’s head of marketing, in announcing the change.

Guidotti stressed that the new dogs have the same great taste and the same price as the former versions. The announcement punned that Oscar Mayer went to “great lengths” in its product development, which took more than a year of recipe testing and tinkering.

But the recipe could change again. Careful label readers will learn that the frankfurters contain celery juice­—a natural source of nitrites—to replace the sodium nitrite preservative that was added. In the US, labeling rules allow celery juice to be listed as a natural flavour but require a disclaimer noting the use of natural nitrite sources.

For now, celery juice is an attractive alternative for meat producers because it sounds more like a food and less like a chemical.

These days, both food companies and shoppers want to see “recognizable names on labels,” says Anieke Wierenga, senior director of food innovation at the Dutch ingredients firm Corbion. “As a food industry, we don’t have the full trust of our consumers. They want to check us and know what’s in there.”

Food giants including Kraft Heinz, General Mills, and Nestlé have spent the past few years aggressively reworking their recipe books to remove artificial colours and flavours in a bid to provide more natural fare.

Changing up preservatives carries much higher stakes because no one wants to play a guessing game with food safety. The industry is evaluating plant-based ingredients, but it could be years before it has a natural solution for every food preservation problem.

It’s not possible to manufacture food in a way that keeps out every microbe, industry experts stress. And although not all organisms are harmful, some can produce deadly enterotoxins, aflatoxins, and botulism toxins.

That’s why the industry has long relied on synthetic antimicrobials—sodium nitrate, sodium benzoate, propionate, and the like—to kill a range of bacteria, yeast, and other fungi. They are inexpensive, are used in tiny amounts, and have a long track record.

And the preservative universe goes beyond antimicrobials. There are antioxidants to keep fats and oils from going rancid, acidulants that lower the pH of foods to prevent microbes from multiplying, and ingredients that maintain color, flavor, and moisture during the product’s shelf life.

Creating a label that looks “clean” to the consumer while covering all the bases for food safety and shelf life is a tall order, ingredient makers say. “The challenges of eliminating synthetic preservatives in favour of natural ones is huge,” says Kantha Shelke, food scientist at the food consultancy Corvus Blue. “The food industry is not there yet, though they are doing a lot of work.”

To meet clean-label requirements, Corbion has accelerated its product development efforts. “Before clean label we could offer just one or two products to meet a need,” Wierenga says. “Now the amount of launches to customers is more like tens per year.”

In some cases, an ingredient maker can develop natural ingredients only to see preferences shift again. For example, Corbion is an innovator in lactic acid ingredients from fermentation to control Listeriain meat products. But recently, food companies found that lactates didn’t meet the “found in the pantry” criteria of some consumers. They wanted to use acetic acid—labeled as vinegar—instead.

The catch is that unlike vinegar, lactates have a mild taste, so both the vinegar and food recipes had to be revamped.

“Now our customers come to us earlier in the food formulation process with the expectation that we can help them,” Wierenga says. Corbion’s R&D team has developed custom vinegars—some with fermented dextrose—for different food recipes to provide the right sensory profile and optimize Listeriacontrol, she says.

Meat is a particularly thorny challenge. Ingredients that Corbion uses with vinegar for preserving meat products include jasmine tea extract—an antioxidant—and citrus powder, which prevents moisture migration out of the product.

If consumers should frown on nitrite sources such as celery juice in hot dogs and other cured meat products, manufacturers will be in for a tough time. Health researchers have flagged the use of nitrites in cured meats because they can form cancer-causing nitrosamines when heated. The health effect is the same regardless of where the nitrites come from.

“Replacing nitrites—that’s a difficult one,” Wierenga admits, given that they perform an important role in preventing botulism growth. “The industry is quite far away from a solution.”

One strategy for getting closer to consumers’ clean-label desires is to replace some chemical preservatives with natural ingredients while keeping one or two of the old standbys in place.

“You might expect to see a decline in the use of synthetically produced preservatives in favor of naturally derived preservatives, but we have not seen that with our own products,” says Paul Hogan, a vice president at Emerald Kalama Chemical, a maker of benzoate-based preservatives.

Hogan points to market research showing that from 2012 to 2016, the number of new food products that contain sodium benzoate increased by 86% even as all-natural claims grew by 69%. Because the claim “all natural” on a food label is not legally defined in the U.S., decisions about naturalness are left to the food brand. In contrast, using synthetics for the purpose of preservation is not allowed in foods certified as organic.

Condiments, which tend to linger in consumers’ kitchens for months, if not years, benefit from the mixed approach, Hogan says. Mustard often contains both vinegar and sodium benzoate because “vinegar alone does not provide the level of microbial control needed to prevent spoilage at the levels it would typically be used,” he says.

Short-shelf-life foods such as bread can also require significant intervention….