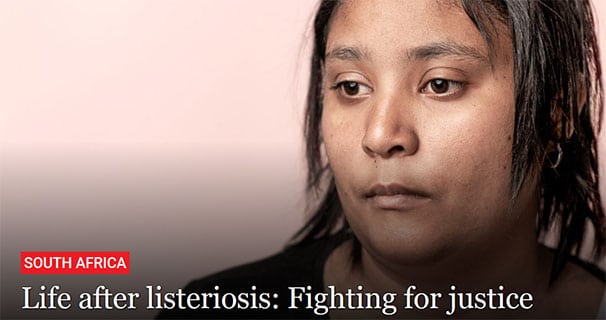 The 2017/2018 listeriosis outbreak that killed over 200 people and caused severe illness in many more may have passed out of the public eye, but for the people infected and affected the pain still lingers and justice remains elusive.

In 2017, South Africa battled the world’s largest listeriosis outbreak ever. For weeks, health workers and scientists were dumbfounded by the outbreak, trying to treat inexplicable symptoms. They ran many tests until finally confirming listeriosis.

Across the country, numerous pregnant women who had listeria went into premature labour. Men and women, who were previously fit and healthy, fell sick overnight and died within a matter of days.

Once the cause of the mysterious illness had been pinned on Listeria monocytogenes, a bacterium that lives in food, the reason for the outbreak had to be found. The puzzle was painstakingly put together by doctors, infectious disease specialists and health officials: all had consumed food products that had come from, or had passed through, the Enterprise meat processing facility in Polokwane between 23 October 2016 and 3 September 2018.

The meat came from a single factory in Polokwane, but the devastation its distribution sowed across the country was wide: people were presenting with listeriosis symptoms in Cape Town, Bloemfontein and Durban.

Panic set in. Products were pulled from shop shelves. “listeriosis”, a word the average citizen had probably never heard before, was now on everyone’s lips as the deadly outbreak became the most dominant news story of July 2017. By December 2017, it was confirmed that Gauteng was hardest hit, with 399 cases. In the Western Cape, 84 cases were reported and in KwaZulu-Natal 45.

The widespread devastation and outbreak prompted Richard Spoor (RSI) Attorneys and LHL Attorneys to file for a class action. The legal team determined four categories of claimants, many of them being mothers who themselves survived listeriosis, but lost their babies due to them contracting listeriosis in the womb.

Listeriosis insurer outed: Tiger Brands, which has refused to take responsibility for the listeriosis outbreak, has also refused, until now, to name its insurer… Spoiler: it’s Santam, reports Financial Mail. ?

The mothers all share harrowing stories of babies who were stillborn or lived only for a few hours and finally closed their eyes covered in red blotches and their skin severely discoloured. Some families were fortunate enough to have had a chance to bury their babies, while others had their stillborn babies taken away and disposed of as medical waste.

There are 14 named claimants and the RSI legal team is currently handling 640 claims as part of the class action. These numbers are expected to rise, especially in light of the fact that the National Institute of Communicable disease (NICD) confirmed more than 1,060 cases, over 200 of which were fatal.

The legal team is taking on Tiger Brands, the manufacturer of the polony products, in a bid to get the blue chip company to pay compensation to people who were either infected or affected by the outbreak. The compensation will cover, in some instances, medical expenses, funeral expenses, loss of wages, pain and suffering as well as a claim for constitutional damages.

On 3 December 2018 the South Gauteng High Court certified the class action, meaning that the court accepted that the applicants could represent not only themselves, but all people who can prove that they were similarly affected by the negligence of the company. Sadly though, this is just the first step.

The matter still has to go to trial and that could be a long time away. The wheels of justice are moving steadily, but painfully slowly. The claimants in the matter are in limbo, waiting for answers that can only be uncovered during the trial. Until then they have no choice but to sit and wait for their day in court.

In November 2019 Maverick Citizen visited some of the victims of the Listeria outbreak to help put a human face to the tragedy. These are their stories…..