07 Feb 17 Lettuce in February: the hidden cost of buying fresh vegetables all year round 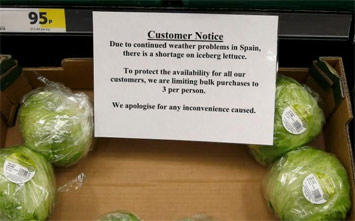 UK media has been aflutter with stories of shortages of lettuces, courgettes, broccoli and other unseasonal vegetables due to bad weather in the Murcia and Andalucia regions of Spain – and there’s been a predictable number of column inches about Britain’s reliance on imported fresh produce.

Typically, the distress and devastation of torrential rains and flash floods in the region has been less reported.

Reports of supermarkets introducing rationing for iceberg lettuces because café, restaurant and other catering outlets were bulk buying to fill in shortfalls from their regular suppliers caused a mixture of amusement and moralising in the press, along with guides on what vegetables are in season in February in the UK.

However, the point is that southern Spain does usually have a climate in which much longer growing seasons are feasible and in which crops with short growing periods can be planted throughout the year.

The dilemmas involved with eating imported fresh produce are concerned with environmental and social impact, and the socialisation by commercial entities into expecting any food we want to be available at any time, without the complications of ethical buying and eating.

These are vital discussions – but what are the costs of a system that means people get used to fresh produce of a high visual and quality specification available 24 hours a day, seven days a week?

Who coordinates the many suppliers and their crops to ensure shelves are not empty and that the product on those shelves has a lengthy “shelf life”?

On the whole, most supermarket buyers negotiate with large intermediary firms called “grower-packers”. With two colleagues from Spain, I collected data from three grower-packers – one based in the UK, one based in Spain and one with offices in both countries – who between them supply more than 50% of the UK’s vegetables and salads. Their networks include thousands of growers in UK, Spain and elsewhere.

Grower-packers have expanded in the past 20 years – since category management became the norm for supermarkets and mass caterers.

Most began as family horticultural businesses or cooperatives that saw the problems that supermarkets would have coordinating supply as opening hours grew ever longer. It’s a frenetic industry, based on an agreed level of quality and delivery when a supermarket makes an order rather than binding contracts to supply at particular prices and times.

The companies we studied were able to supply the big retailers and caterers “on time, to specification, in full” 99% of the time.

Grower-packers provide a risk buffer between the supermarkets and the suppliers, reducing the risks for both. The big customers rely on them to coordinate – not just the buying – but everything from the initial planting through to the quality of the quality of the produce on delivery.

The grower-packers provide agronomy advice to suppliers and work with them to ensure a market for their produce. It is a flexible system, but the risk is that neither customers nor suppliers are committed to the intermediary or each other.

The reason is the incredibly tight margins everyone is working with: the opportunity to save or gain even a penny or less per kilo (depending on whether you are buying or selling) drives relentless searching around – or “promiscuity” as one of our interviewees put it.

The big question is how such a system can be sustained. Intermediaries in the food supply business make average net profits (that is, after everything has been paid) of around 1-2% – margins that are easily wiped out by inflation, weather or fuel price increases.

Horticulture is not subsidised and individual growers do not always break even. We know that produce is sometimes bought at prices that are less than the cost of production – but most grower-packers take a basket approach in which hopefully losses on one crop can be balanced against gains on another.

Like most family-run businesses, the shares are held by directors who also run the business day-to-day. They get a salary but rarely a bonus and don’t pay themselves a dividend out of profits. They often support the industry further through making personal loans to their businesses. Their aim is survival for themselves and their suppliers rather than maximising wealth.

It’s a low-wage industry. To protect margins, costs are rarely discussed between supply-chain partners – but knowing your own costs is the key to survival.

The growers and intermediaries are efficient businesses but there are as yet unquantified costs in supplying a vast network of supermarkets such as those related to transportation, waste disposal and inaccurate forecasting.

It’s not a case of raising prices to consumers: it’s about identifying the considerable waste associated with distribution throughout the system and making savings there. Unless suppliers’ margins allow growers and their intermediaries to reinvest and expand, then food systems lack real resilience.

People in the UK will become more reliant on imports and run the risk that not only the production of food but the management of food supply has moved out of the UK.

When there is a shortage, these businesses, with their networks of suppliers across Spain and the UK, can use their contacts elsewhere to supplement their usual supply with produce from elsewhere in the world – but this can be costly.

Smaller businesses, unless they have a local, seasonal produce approach, may lose out until another crop comes through. There is also some risk of being defrauded – for example by suppliers who pass off as respectable alternative produce from growers using unsafe pesticides.

So demand for lettuces in February relies on a very fragile ecosystem. Something as capricious as bad spring weather in another part of Europe can empty UK supermarket shelves.

And, until a more robust model can be developed that reduces the financial risk for all sides, consumers may have to get used to alternatives closer to home.