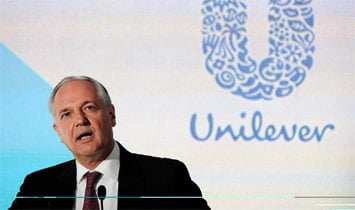 Kraft Heinz’s unsolicited $143-billion offer forUnilever [now spurned and off the table] comes at a time of vulnerability for the Anglo-Dutch giant, the world’s second-largest consumer-goods firm by sales after Procter & Gamble, reports the Wall Street Journal.

Chief Executive Paul Polman has more than doubled the Anglo-Dutch company’s share price since taking the reins in 2009, shifting into higher-end personal-care products and away from a reliance on food.

More recently, though, he has struggled—alongside much of the rest of the consumer-goods industry—to boost sales amid a host of headwinds.

Unilever makes most of its sales from emerging markets, where it has been hit by currency gyrations, rising commodity prices and tough economic times in countries such as Brazil and India.

Stubbornly low inflation in many markets has made it difficult to raise prices to make up for slowing volumes.

Polman’s push into higher-end personal care led to a series of acquisitions, including a 2016 deal to buy Dollar Shave Club for $1-billion. In 2015, the company bought premium skin-care brands Murad, Dermalogica, Kate Somerville and REN. The year before, Unilever created a “prestige” division, which sells high-end cosmetics and personal-care products.

Unilever was founded in 1929 through the merger of British soap maker Lever Brothers and the Netherlands’ Margarine Unie, which began making the plant-derived spread in 1872.

It bought US giant Bestfoods for $20.3-billion in 2000, catapulting its food business into the world’s second largest, behind Nestlé SA, and shifting its portfolio deeper into developed markets.

Polman’s predecessor, Patrick Cescau, who was named CEO in 2005, took steps to overhaul the company’s management structure. He cut costs and merged its two big divisions, food and consumer products, to allow them to share marketing expertise and distribution networks.

Polman, 60 years old, has courted controversy with some investors for what has been described as a take-it-or-leave-it style of engagement.

A month after becoming CEO in 2009, he scrapped financial targets. Some investors have also been rankled by his high-profile push for environmental sustainability.

Amid the current headwinds, he started Unilever on a cost-cutting campaign, including so-called zero-base budgeting—a management practice popularised by Kraft Heinz shareholder 3G Capital Partners. The technique is based on justifying all costs from scratch each year.

The savings are funding an organisational reshuffle at the company aimed at boosting sales that CFO Graeme Pitkethly recently described as “the biggest change Unilever has undergone in the last 10 years”.

It is restructuring its workforce to direct more resources to local markets, and giving product-category-focused teams there more autonomy.