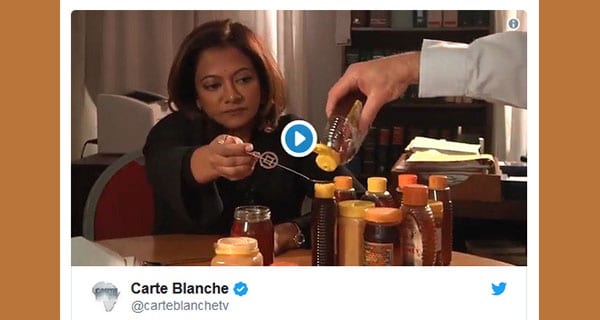 Honey adulteration is in the news again… this time MNET’s Carte Blanche put it into the public eye recently, depressingly illustrating that it’s not just the imported honey which is adulterated with sugar – some of the ‘100 percent pure’ local stuff is too.

As tests conducted overseas on behalf of the SA Bee Industry Organisation (SABIO) have revealed‚ the creativity which beekeeper, Roland Kennard, spoke of on Carte Blanche on Sunday included passing off a sugar concoction as honey [you can view the documentary below].

“I like stretching the boundaries in creativity,” he said.

The owner of Grandis Apiaries in Howick admitted to feeding sugar to his bees – as opposed to letting them feed on pollen – but denied cooking up sugar and lemon juice to simulate honey‚ as claimed by a whistleblower.

Manoli’s Munchies‚ a family business which has five branches in KwaZulu-Natal‚ hastily removed its stock of Grandis Apiaries “Natural Honey” from all stores on Monday morning.

“The news has come as quite a shock‚” said Manoli’s Mario Hajipetrou. “I’ve instructed my store managers to refund anyone who returns that honey.

“We knew we were getting the honey at a good price‚ via a third party‚ but we trusted the product was as pure as stated on the label‚” he explained. “This has been a very big wake-up call.”

Retailers’ “extreme focus” on high margins and low cost products‚ together with insufficient product due diligence‚ has allowed fake honey to proliferate‚ says Craig Campbell‚ SABIO board member and MD and chief beekeeper at Peel’s Honey of Howick.

“Fake and adulterated honey makes its way to the shelves of trusted retail chains and even into in-house brands and private label bottles.

Many do not indicate countries of origin‚ for example‚ he said.

“All that makes it impossible for even a reasonably circumspect consumer to understand or appreciate what they are purchasing‚” Campbell said.

Some companies use the words “Packed in South Africa” to fool consumers into believing they’re buying local honey‚ when in fact it’s imported from China‚ which is infamous for honey adulteration.

The Shoprite Group told TimesLIVE it does not stock the honey products identified in the Carte Blanche exposé as adulterated honey.

“And we have written confirmation from the supplier of our private label product‚ The Kitchen‚ that the honey supplied is authentic and adheres to the regulations that govern honey in South Africa.”

The problem is that testing for added sugar in honey is neither simple nor cheap.

Phil Walker‚ another KZN honey producer and SABIO board member‚ said there were effective tests available overseas to determine whether or not honey had been adulterated‚ but they were incredibly expensive.

“Honey is an extremely complex substance and only an analytical chemist can fully understand its complexities‚” he said.

Basic testing of relative amounts of sugar‚ water content and acidity of honey can be done in South Africa‚ but to test if the sugars present in honey are derived from plant nectars and collected by bees‚ and not from sugar cane or corn syrup instead requires sophisticated testing‚ which can only be done in labs overseas.

Honey adulteration is fraud on a grand scale‚ Campbell says – it threatens the health of diabetics‚ who can tolerate small amounts of pure honey but not sugar; it undermines the South African beekeeping industry’s viability and threatens South Africa’s agriculture and food security in general‚ given the key pollinating role bees perform…..

Honey: a well-known golden delight that’s been deemed the healthier option when it comes to sweeteners. But more and more impure honey is making its way into local stores. This Sunday, @Devi_HQ puts some honey brands to the taste test. Join #CarteBlanche at 7pm on @MNet ch101. pic.twitter.com/mXDWWDtJz3

Is there a big problem with SA honey?