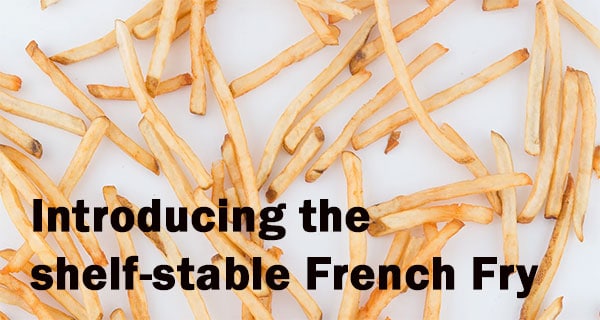 Farther Farms, based in Rochester in upstate New York, has developed a new type of pasteurization that will make perishable food shelf stable. As a proof of concept, the company has made packaged french fries — that would normally be sold frozen — that can sit at room temperature for 90 days before being eaten. Even better: the process doesn’t use artificial preservatives.

Co-founder Vipul Saran (left) developed the tech as a grad student at Cornell University. Saran grew up in a farming family in India and saw how challenging it was to deliver produce (in their case, potatoes) in the supply chain. The necessary infrastructure was minimal and expensive to use; refrigerated shipping containers sometimes cost more than the value of the produce itself.

At Cornell, he started exploring an alternative. “The whole goal was, basically, how can we look into new, innovative food processing technologies that can allow us to create value-added food products from these perishable food products, which avoids the need and the dependency as much as possible on refrigeration and freezing?” he says.

When something like milk is pasteurized, it’s quickly heated using steam to kill pathogens. The new process uses carbon dioxide instead. The food is packed in proprietary packaging, then processed with high-pressure (“supercritical”) CO2, at a moderately high temperature, which the company’s studies have found inactivates microorganisms and enzymatic activity.

At scale, the CO2 can be used in a closed loop and captured at the end of the day to reuse in the system the next day.

“Because of our use of carbon dioxide instead of steam or water, the product damage to nutrition is significantly less, but we achieve safety in the same way as milk is pasteurized, or as beer or cheese is pasteurized,” says CEO Mike Annunziata.

The process goes farther than normal pasteurization, similar to the ultra-high-temperature processing sometimes used to make milk shelf-stable, but without affecting flavour. (The founders also note that if you tried to use typical pasteurization on a french fry, you’d end up with mashed potatoes.)

Though the company’s shelf-stable fries are its first offering, the same process can also be used on other types of perishable food. The startup has tested other vegetables, salsa, dairy products such as paneer, and cooked chicken, all of which may have similar shelf lives. They’re focused on processed foods — french fries instead of potatoes, or salsa instead of tomatoes — to help generate more economic value for farmers.

Because the products can more easily travel long distances, it also opens up new markets. “If you can begin producing internationally and create markets for value-added food products that don’t currently exist, you’re going to do the most to help farmers,” says Saran. In India, where millions of farmers live in poverty, and where food worth $14 billion is wasted each year, the tech could help create new opportunities.

The startup hopes to work globally. “We envision a world where this technology is on every continent, really having an impact on farmers who want to process their food, and turn it into value-added products to earn a premium,” says Annunziata.