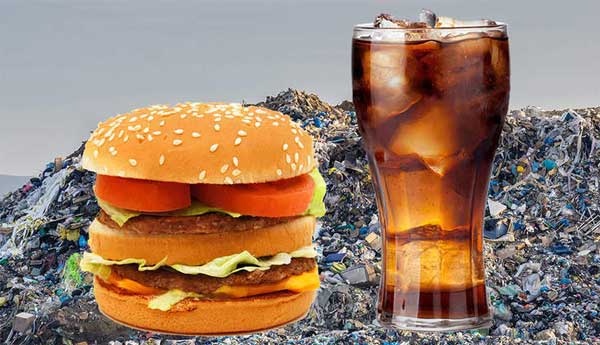 Two of the world’s most iconic food and beverage brands have launched ambitious initiatives aimed at significantly reducing waste and increasing the recycled and biobased content of their packaging. Together, they mark the acceleration of a years’ long war on waste.

The twin announcements signal a new era among large consumer brands to take responsibility for their packaging. It’s coming in an age of increased global concern over the prevalence of plastic and other waste materials in waterways and oceans, not to mention streets and landscapes around the world.

It also comes at a time when brands such as Coke and McDonald’s recognise that their global growth ambitions could be stymied by consumer, activist and governmental pushback against mounting waste streams.

Both companies’ goals will require considerable effort. For McDonald’s, it will require setting up recycling programs in restaurants across the more than 100 countries where it operates.

Currently, recycling is in only about 10 percent of McDonald’s restaurants globally, according to Francesca DeBiase, chief supply chain and sustainability officer for McDonald’s Corp. Meeting its goal means the company will have to address the dearth of recycling infrastructure in many parts of the world.

Brands such as Coke and McDonald’s recognize that their global growth ambitions could be stymied by consumer, activist and governmental pushback against mounting waste streams.

Coke will face similar infrastructural challenges in meeting its commitment to recycle the equivalent of all the bottles and cans it sells — that is, “for every bottle or can the Coca-Cola system sells globally, we aim to help take one back,” according to the company’s press release.

That goal gives the company some flexibility: It can collect more than its fair share of beverage sales in some countries while underperforming in others and still meet its goal.

As with McDonald’s, Coke will need to overcome the lack of recycling systems in many parts of the world where its products are sold.

Both companies’ challenges are compounded by the fact that neither controls the source of its waste problem: McDonald’s restaurants and Coke bottling plants are owned and operated by franchisees, not by the parent companies, meaning that they will have to work closely with these independent operators to ensure their initiatives achieve their goals between now and 2025 (for McDonald’s) and 2030 (for Coke).

And, as both companies have learned, the franchisees are known to push back against mandates they believe are draconian or too expensive.

The Coke and McDonald’s announcements are merely the latest steps in their efforts to curb waste that go back to the 1980s, when awareness of “overflowing landfills” helped spur the modern environmental movement. Both companies long have been the target of environmentalists and anti-litter activists.

In the 1970s, Coke, along with Pepsi and other beverage companies, introduced recycling while simultaneously battling communities seeking to impose deposit schemes to increase the takeback of bottles and cans to reduce local litter.

Over the years, both companies have taken numerous steps to eliminate solid waste and to reduce the amount of material used to package their products.

Coca-Cola’s latest initiative was driven in part by James Quincey, a 22-year company veteran who ascended to become its CEO last year.

Ben R Jordan, Coke’s director of supplier sustainability, says that Quincey’s support has been key to making this “a major business initiative” at Coke, as opposed to a sustainability initiative — that is, core to the company’s strategy for growth and profitability.

“I’ve been at Coke 21 years,” Jordan told me. “I’ve never been associated with a project or an initiative quite like this.”

Currently, only a relatively small portion of Coke’s beverage containers are recycled. The company’s latest sustainability report stated that it “refilled or helped to recover and recycle bottles and cans equivalent to approximately 59 percent (as estimated) of those that we introduced into developed markets” in 2016. But the company doesn’t report package recovery rates for emerging markets.

Those emerging markets represent a Herculean challenge, and a potential bottleneck for the company’s ambitious packaging recovery plans.

A 2015 report by Ocean Conservancy and McKinsey found that 60 percent of the plastic that enters the world’s seas originates from just five countries: China; Indonesia; the Philippines; Thailand and Vietnam.

Between 5 million and 13 million tons of plastic leaks into the world’s oceans each year, some of it ingested by seabirds, fish and other organisms, and by 2050 the ocean will contain more plastic by weight than fish, according to research (PDF) by the Ellen MacArthur Foundation.

“There are markets out there that have zero formal infrastructure for waste management or recycling,” acknowledged Jordan, who is working to tame plastic-bottle waste streams around the world. We don’t think there’s a one-size-fits-all approach.”

He and his team “genericized to five different types of systems they think can work.

One success story is in Mexico, where Coca-Cola FEMSA and Arca Continental, two multinational beverage companies headquartered in Monterrey, bottle and distribute Coca-Cola products in that country.

FEMSA and Arca are among 80 food and beverage brands that sponsor a nonprofit program called ECOCE (Ecología y Compromiso Empresarial), which facilitates the recovery of packaging for recycling in Mexico. Among other things, ECOCE operates a program that collects packaging waste in schools, from kindergartens through secondary. Students recover and recycle waste from PET containers, high-density polyethylene (HDPE), aluminum and plastic bags generated in their homes or at school.

According to ECOCE, Mexico is the world’s leading recycler of PET bottles and containers, recovering just over 50 percent of bottles, compared to just over 30 percent in the United States. Coca-Cola is evaluating how it can replicate the Mexican model in other markets.

Another part of the strategy is to leverage the relationships it built to tackle Coke’s 2007 commitment to replenish 100 percent of the fresh water it extracts to produce its products by 2020.

In 2016, the company announced that it had met its goal five years early, returning the equivalent amount of water used in its global sales back to nature and communities — the first Fortune 500 company to achieve such a water-replenishment target. The nonprofit environmental group WWF was a key partner in that effort.

The local partnerships created to tackle water could be leveraged to address waste, said Jordan.

“We’ve got teams on the ground on both the Coca-Cola side and the WWF side who have been working for years around watershed improvements in the Yangtze River. They’ve been focused just on the freshwater elements. Why not scale that up to think about waste as part of that as well? They’re engaging in this community. They’re engaging in that watershed.”

In addition to WWF, Coke plans to work with other global partners, including the Ellen MacArthur Foundation’s New Plastics Economy initiative and the Ocean Conservancy’s Trash Free Seas Alliance. The company also will launch efforts with new partners at the regional and local levels and work with its key customers to help motivate consumers to recycle more packaging.

McDonald’s, for its part, faces its own waste-recovery hurdle: Most of its packaging leaves its restaurants, making it difficult to recover and recycle. “We’re going to be working with local municipalities and local owner-operators to educate our customers and our restaurant employees on this,” DeBiase says…..

GreenBiz.com: Read the full article, penned by Joel Makower is chairman and executive editor of GreenBiz.com, and a longtime well-respected voice on business, the environment, and the bottom line.