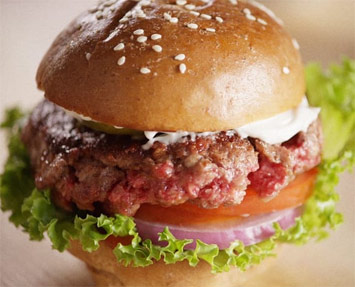 Inside a former baked-goods factory near the Oakland, California airport, a construction crew is installing giant vats that will soon be used to scale up production of the Impossible Burger–a plant-based meat designed to look and taste good enough that meat eaters will want to order it, not vegetarians.

The “meat,” developed by a team led by former Stanford biochemistry professor Patrick Brown, is currently being produced in a 3000m2 pilot facility in Silicon Valley and a 457m2 space in New Jersey.

The new facility, at around 18200m2, will dramatically scale up production capacity. When the factory is fully ramped up, it will be able to produce over 450 000kg of Impossible Burger meat a month, or 250 times more than today.

“It will enable us to go from something that is scarce–and we’re constantly getting complaints from customers about the fact that they can’t buy them at their local restaurant–and start to make it ubiquitous,” Brown said at an event launching the new factory.

The burger is currently available at 11 restaurants, including 3 that launched it on March 23. But by the end of the year, the company expects to supply 1,000 restaurants. It just signed a deal to have the burgers featured in the San Francisco Giant’s baseball stadium.

For the company, achieving scale is a critical part of achieving its mission. Brown started working on the project while thinking about the problem of climate change; raising cows and other animals for meat is one of the world’s largest sources of greenhouse gases. It also uses and pollutes more water than any other industry, and drives deforestation.

But he realised that the majority of the world wouldn’t voluntarily go vegetarian for those reasons.

“Billions of people around the world who love meat are not going to stop demanding it, so we just have to find a better way to produce it,” he says.

The team studied the properties of meat–particularly heme, the molecule that makes blood red and gives meat a meaty taste–and then experimented with recreating those properties using only ingredients from plants.

The result looks like it was made from a cow, not plants. The handful of chefs who were given first access to the product say they think of it as meat.

“It kind of made this transition in my mind to be–it’s just another kind of meat,” says chef Traci Des Jardins, who has been serving Impossible burgers at her San Francisco restaurant Jardinière for about a year, and now is also serving it at Public House, her restaurant at the city’s ballpark.

Before it’s cooked, the product is red like raw beef; as it cooks, it browns. As the heme mixes with juices and oozes out, it can look like it’s bleeding.

As the company scales up its beef alternative, it will focus on restaurants. In a year, it says, US restaurants serve more than 5 billion pounds of burgers, and Impossible wants its 12 million pounds to be among them.

Retail will come later, along with other products that are currently in development, such as poultry and steak.

“Our long-term goal is to basically develop a new and better way to create all the foods we make from animals,” says Brown.

High-tech farming poised to change the way the world eats

Wave of Silicon Valley-style disruption is hitting the food industry