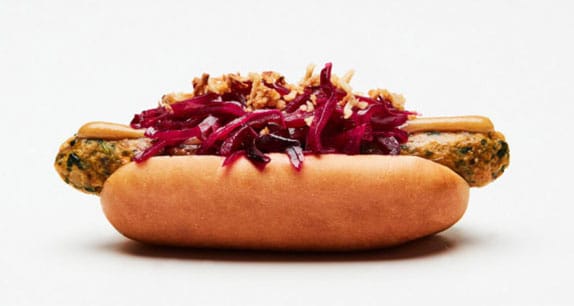 How extraordinary! Ikea, the iconic global decor/furniture retailer [Wish we had it in SA! Ed] is also one of the top ten food companies in the world. Here’s news of its latest food innovation success…

At the food counter past the checkout lanes at Ikea stores, where the company sells giant frozen yogurt cones for a dollar and other snacks to keep guests satiated and ready to buy more sofas, it’s now possible to buy a hot dog for just 75 cents. And the hot dog has no meat in it at all.

Made from a blend of kale, red lentils, carrots, and ginger, the new offering is part of Ikea’s effort to reduce its carbon emissions. And people seem to love it – within two months of launch, a million dogs were sold!

Made from a blend of kale, red lentils, carrots, and ginger, and served on a soft bun slathered in sweet and spicy mustard, pickled red cabbage, and crispy onions, the vegan dog (the bun makes it just vegetarian) is designed in part to appeal to a growing number of customers who want to eat healthier and plant-based food.

But it’s also part of Ikea’s much larger ambition to cut its carbon footprint.

“What we absolutely aim for is to encourage customers to choose the veggie dog over the meat dog – and we also see a reality that that really happens,” says Merlijn Crébolder, Ikea food manager in the US.

“We see in our sales figures that we are meeting the needs of our customers who have already made the choice of vegan options, but we also see that the classical meat eater is very willing to try this option, because it’s really a tasty dog.”

Meat is one of the world’s largest contributors to climate change; one recent study suggested that shifting to a vegan diet is likely the single largest way one person can reduce their own environmental impact.

Another suggests that beef consumption will need to drop 90% to avoid the most dangerous climate change.

For Ikea, food ingredients are a relatively small part of its overall carbon footprint–in 2016, it was just 2%. But because of the company’s size, shifts in its menus do matter.

Ikea, according to its recent sustainability report, is one of the top 10 largest food companies in the world. In a year, it sells 100 million hot dogs.

The company is working to reduce its emissions in line with the Paris climate agreement, and by 2030, aims to be “climate positive,” meaning that it will reduce more emissions than its value chain creates.

Ikea has spent the last few years investing in its own wind and solar plants. “We’re an independent renewable power company at the same time as a home furnishing business,” chief sustainability officer Steve Howard told Fast Company in 2015.

By 2020, it will run on 100% renewable electricity. It’s beginning to shift to zero-emissions deliveries, experimenting with ways to help customers resell used products, and eliminating single-use plastic products.

Food is one piece of the overall changes.

Ikea’s first foray into plant-based food was a veggie meatball designed to compete with its iconic Swedish meatballs. The veggie balls, first offered in 2015, now make up 15% of the company’s overall meatball sales.

The veggie hot dog was first tested in a Swedish store earlier this year, then expanded to other stores in Europe in the summer.

In the first two months, the company sold one million veggie dogs. The product launched in American stores in late September; in the first two weeks, Crébolder says, one out every 10 customers to buy a hot dog in US stores is choosing the vegan version.

The company experimented with various recipes and landed on a version that doesn’t look or taste like an imitation of a beef hot dog.

The crispy onions, added as a topping, give “a little bit of snap to the dog” that would normally come from the texture of a sausage casing….