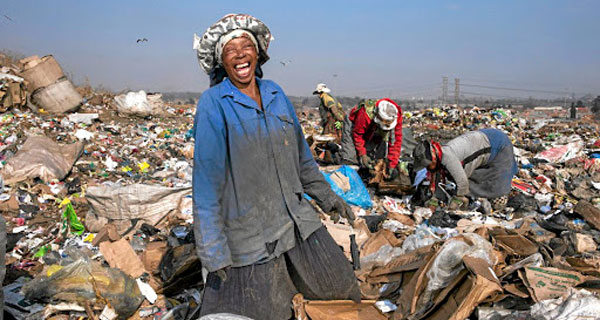 SA has yet to unlock the full economic potential of recycling, say experts in the industry. But already many thousands of hard-working collectors and middlemen are earning a living in this way — a fact that has been lost on many in a country that posted a 26.7% unemployment rate in the first quarter of 2018.

So says Maxwell Ndlovu, owner of Okuhle Waste Management, who has been in the business for 15 years.

“When you go out and collect these 2l bottles, you will not go to bed hungry. If there’s one thing I know it’s that people must just recycle, and in return they will get money. But most of the time they are not aware of that.”

Around 37,000 people rely on recyclables for their daily bread, according to the Paper Recycling Association of SA (Prasa).

“Informal waste collectors can often be seen as a nuisance, especially when hauling overloaded trolleys along busy roads; but these people are making a living by recovering recyclables and selling them to buy-back centres,” says Prasa operations director, Ursula Henneberry.

Poor awareness appears not only to have robbed South Africans of opportunities to generate income, but also of a source of national pride.

Last year South Africans recycled 65% of the PET plastic bottles in circulation in the country. This recycling rate is on a par with international standards, says Petco.

In August last year Prasa found that SA’s paper recycling rate had increased to 68.4%, growing by 2% year-on-year since 2012.

Despite all this activity in the sector, many South Africans remain in the dark, and few recycle in their homes.

According to consumer research commissioned by Petco in 2016, only 11% of the people surveyed claimed to recycle all of the time. Many of them said the lack of storage space at home and poor access to recycling depots were barriers.

“We see improvements every year and it is becoming more mainstream, but as a society we have yet to see a surge in recycling behaviour,” says Petco CEO, Cheri Scholtz.

Many confuse collection and reuse with recycling.

“In industry we talk of the actual reprocessing of items as being recycling,” Scholtz says. “We find that in SA people don’t see collection points or recycling being collected from homes … so they don’t think it is happening or that it’s worth it. We believe SA has a key role to play in the recycling economy.”

Significant inroads have already been made, with 2.15bn bottles recycled in 2017, creating 64,000 income opportunities. This saved 139,000t of carbon and 578,000m² of landfill space. Gauteng was the most active province.

The organisation increases its target annually and has to date not failed to reach its goal. The purpose of setting targets is to plan for infrastructure and collection points against end-use demand.

The production of polyester fibre, used to make fabric, and food grade resins that can be applied widely from the marine and aircraft industries to crafts, are the main end-use markets for SA recyclers.

In 2017 the value of these downstream products was about R1bn.

The recycling industry has reduced the need for polyester fibre imports, with recyclers now encouraged to export fibre, Scholtz says.

Ndlovu, whose business acts as a middleman between recycling plants and collectors, buys 1kg of PET bottles for R4.50 and sells it on at R5.

These can be recycled to produce new bottles at two plants in Gauteng. SA is one of few countries certified by Coca-Cola able to do this kind of bottle-to-bottle recycling.

“We need to encourage consumers to participate wherever possible and use their buying power and influence to demand products containing recycled content,” says Scholtz.

Perhaps this is just the tonic to economically empower small businesses.

Fashion and accessory house The Joinery, based in Cape Town, has used recycled PET bottles to make laptop bags, luxury slippers and bespoke stationery. The business started as a small sewing co-operative in Manenberg, employing women who had worked in some the Cape’s now-defunct textile factories. Within a year of using fibre made from recycled bottles its staff head count grew to 37.

The business, which has thus far kept 15,000 bottles out of landfills, illustrates a little-recognised economic potential, but also serves as a case study which should encourage others to come on board.