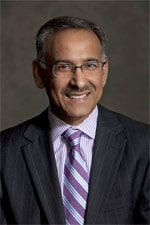 Each day about 1.3 billion consumers in 200 countries eat or drink a product manufactured by PepsiCo, the second-largest food and beverage company in the world. Figuring out what those diverse consumers want today and tomorrow plus the means to get it to them is the job of Dr Mehmood Khan, PepsiCo’s executive vice president and chief scientific officer.

Khan, a medical doctor who joined PepsiCo in 2007, believes the food environment began to shift about a decade ago when digital communications accelerated information exchange and consumers became more aware of what they were eating and started asking more thoughtful questions about the food supply.

In this new and evolving consumer environment, Khan is working to help innovate the way PepsiCo approaches research, technology, product development and nutrition to better accommodate the global changes that lie ahead.

Khan talked with FutureFood 2050 about how PepsiCo Global R&D looks at the future and the changing role of the multinational food industry in feeding the world during the coming decades.

FutureFood 2050: How does PepsiCo, and specifically its global R&D organisation, anticipate the future?

Khan: As we think about the future, we are really thinking about broad ecosystems centered around our consumer. But we have to think about everything—from our supply chain, seed, through to shelf because our business is designing, developing, making, moving and selling our products. And so the future to us is that end-to-end system.

FutureFood 2050: What are some of the mega trends that will affect the global food industry in the future?

So clearly, the demographics is going to shift in geography, and the shift in economies [will move] from Western developed, Northern economies to Eastern and more Southern hemisphere economies … in particular China, India, the Asia Pacific [region], South America dominated by Brazil, and then the emergence of Africa. [There will be larger populations of] young and youth, in particular in Asia and South America, but aging populations [in] Western Europe, Japan, North America. And now increasingly we’re recognizing even China is going to have a substantial aging population.

And one other important mega trend is health and wellness. The consumer today is far more tuned in to thinking about their personal health, what they consume, and far more aware of the ingredients in their products and where they are sourced from. However, health and wellness is a very personal perspective. What it means to you and I in the United States may have a very different meaning to a person in China. So the science doesn’t change, but the cultural interpretation of health and wellness changes by location.

FutureFood 2050: How are you transforming your global R&D organisation to meet these challenges?

Khan: Up until about 2005 or 2006, our industry grew very successfully with a tried formula. Have great brands, do a lot of refresh research, create a new flavour, new colour, go around the world, launch the same product, and make it aspirational, and you grew. [Then] things started changing over the last decade. Consumers became more aware, had more knowledge, started asking more questions, and culturally relevant products started to become even more important.

[Transforming PepsiCo Global R&D] started first and foremost with getting the right expertise. For example, at PepsiCo we had great talent, but the talent was divided by foods, beverages, snacks, our traditional Quaker nutrition. And you could build a career here at PepsiCo never having transferred from one division to the other.

Great in that old model. But there was no leverage of technology and knowledge across these divisions, which meant that we were not maximizing our potential. We started doing a few things. Build one global team. We started moving people from foods to beverages, beverages to foods, snacks to beverages, and so on. And with that, knowledge transfer started to happen. The second was to bring in added talent with new skills—computational mathematics, biology, material science, physiology, endocrinology, agronomy, culinary—I can go on and on. And the last piece of this was really aligning this R&D organization globally with appropriate business growth platforms…..