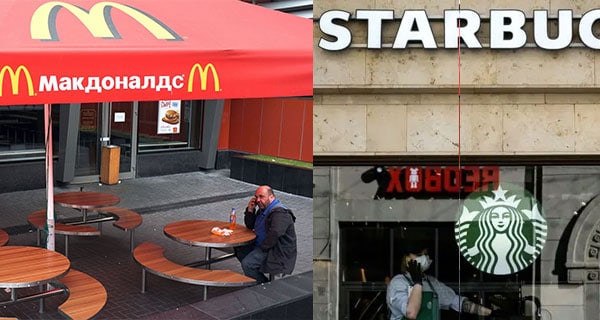 Mars, Nestlé, PepsiCo and Danone are just a few of the large FMCGs to stop investments, sales, advertising or other activities as the Ukraine invasion continues.

As the war intensifies in Ukraine, food and beverage companies are under growing pressure from consumers and investors to scale back or suspend their operations in Russia.

Companies have taken divergent paths in responding to the situation with Russia. Some like Diageo and Carlsberg made a decision just a few days after the crisis to pause exports, while others have taken action weeks later.

Mars Wrigley, the maker of M&Ms and Milky Way, announced it was suspending new investments as well as imports and exports of its products in the country, and scaling back operations. Several businesses, including Danone, PepsiCo and Nestlé, have announced they are stopping sales to all but necessary essential items like milk or baby formula.

How these large food and beverage companies navigate the crisis could have real impacts either to their bottom line or the perception people have of their brands.

Buying habits increasingly are being influenced by the position a company takes on issues, such as Black Lives Matter or sustainability, and whether these stances mirror those of the shopper. If consumer sentiment continues to oppose the action in Ukraine, companies that haven’t taken action could see a hit to their sales.

“Companies doing business in Russia need to seriously consider whether it’s worth the risk,” he said following the announcement by PepsiCo and other companies to suspend their operations. “As investors, we want assurances that our holdings are not in harm’s way.”

FoodDive.com has a list of largeFMCGs and changes they have made, if any, to their business operations in Russia. This will be updated regularly….click on the table for access to the full list and updates….