Kimbal Musk (brother of Elon of PayPal, Tesla and SpaceX fame) is trying to change the way we eat by creating what he calls a “real food revolution”.

For over a decade, he has run two restaurant chains, The Kitchen and Next Door, which serve dishes made strictly with locally-sourced meat and veggies. In 2011, he started a nonprofit program that has installed “Learning Gardens” in over 300 schools, with the intention of teaching kids about agriculture.

His latest food venture delves into the world of local urban farming. 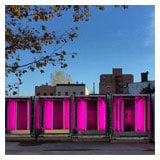 About the size of the standard one-car garage, each shipping container can produce the same amount of crops as two acres of outdoor farmland, or about 50,000 mini-heads of lettuce a year.

One participant is Josh Aliber, 24, who moved from Boston to Brooklyn to join Square Roots. Never having farmed, he’s now started up his own specialty herb business and running a vertical farm.

His shipping container farm runs on 10 gallons of recycled water a day, which is less than the average shower’s worth.

Aliber can monitor everything from the oxygen level to the humidity — which affects the plants’ taste and texture — using “the computer panel” near the door and sensors in the growing beds. If he wants a tropical or northeastern climate, he can control that too.

The larger goal of Square Roots, says Musk, is to create “a real food revolution”.

In the late 1990s, following the tech boom, the Musk brothers moved from South Africa to Silicon Valley. They invested in X.com, which later merged with PayPal and was acquired by eBay.

Kimbal Musk has known Peggs, who previously worked on tech start-ups sold to Walmart and Adobe, for a decade.

Before Square Roots, they worked together at The Kitchen, where Peggs served as the “President of Impact” and helped expand the chain to new cities.

When asked how his experience in tech translates to running a vertical farming accelerator, Peggs says the two fields share the same motivation.

“You learn how to execute impossible dreams. This was all just a Powerpoint presentation six months ago,” says Peggs, pointing to the farms behind him.

“Today’s consumer wants to know they are supporting companies that are doing something good for the world,” Peggs says. “This not just a Brooklyn foodie trend.”

Kimbal Musk is on a mission

The entrepreneur talks about food politics, technology, and how entrepreneurs can reshape a $5 trillion-dollar food industry….

Kimbal Musk: Food is the next big thing

Twenty years ago an internet pioneer made a fortune for being on the cutting edge of a booming industry, and today he is suggesting food will be the next big thing.

Kimbal Musk, entrepreneur, venture capitalist, and environmentalist, and yes, sibling to Elon Musk, took the stage at the 2015 Life is Beautiful symposium in the US to discuss the reality of food today and how the changing market can lead to large opportunities….

You can read more here, or watch his presentation below.