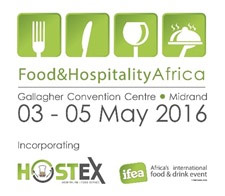 Described as the “biggest and best hospitality show on the African continent”, the Food & Hospitality Africa show in 2016 is the merger between Hostex, Africa’s leading expo in the industry for close on three decades, and IFEA, the international food and drink event that launched in 2013.

It will take place at Gallagher Convention Centre 3-4 May 2016, a venue move from Sandton Convention Centre. The main reason behind the move is to have the exhibition on one level, but other benefits such as the accessibility of the venue from both Johannesburg and Pretoria, the nearby Gautrain station, ample parking, and excellent restaurants and accommodation in the vicinity all contribute to the suitability of the new venue.

“It is the show that the industry has asked for and we have answered,” says Gary Corin, MD of Specialised Exhibitions Montgomery. “The two successful hospitality and culinary shows have merged into one co-located show to leverage the size and scale of two industry greats to create one expo that will be the largest and most representative food and hospitality trade event on the African continent.

“Most importantly, it allows both exhibitors and visitors to benefit from the significant synergies between the two shows.”

Nicholas Sarnadas, event director of Hostex, says, “Hostex has always been right at the forefront of change, with the needs and expectations of the industry being the primary driver behind developments throughout its history. This new show follows the trend and delivers an expo that more than meets the needs of the industry – it’s wholly responsive to the changing landscape of food and hospitality in South Africa and the rest of the world.

“We’re very proud of this merger, which we know will better serve the needs of the industry and will pay excellent dividends for all stakeholders.”

The new expo will be officially launched to the industry at Hostex 2015 at Sandton Convention Centre in March.

For more information go to www.hostex.co.za.